Big business suffers a big drop in sales during pandemic

Big business suffers a big drop in sales during pandemic 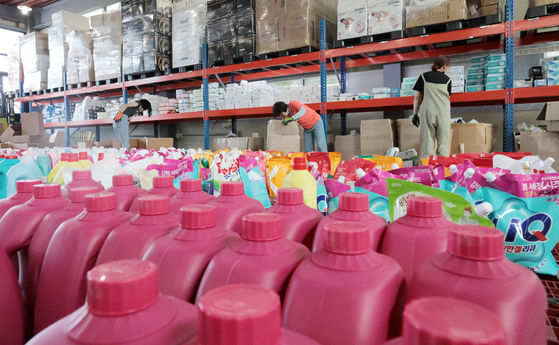 Inventory is stacked inside a warehouse in Goyang, Gyeonggi, in June. [NEWS1]


Big companies have been hit hard by the pandemic, with 11 of the 15 largest reporting revenue drops in the first half.

Concern now is that this will result in lower investment by major corporations when this sort of investment is most needed and that the rebound in the economy, expected in the third quarter by the administration, might be delayed.

Airlines and oil refiners have been especially hard hit. The revenue of Korean Air Lines in the first half fell 33 percent, while it fell 29 percent at SK Innovation and 25 percent at GS Caltex. At Posco, revenue fell 12.6 percent.

In some cases, the operating profit jump may be related to a cut in expenses and investment.

“Some companies have been conservative with their spending since last year and naturally continued to spend less upon the rise of the coronavirus pandemic, gradually leading to an increase in the operating profit,” said Sung Tae-yoon, an economics professor at Yonsei University.

“When the country is in a recession, corporations typically try to temporarily pull up their operating profit by reducing costs by a bigger amount than the size of the revenue drop,” said Lee Sung-hoon, a professor at the Sejong University School of Business. “Although the profitability may look good in the short run, it is absolutely not a good sign considering that the market size suffered a blow.”

Some companies have it worse, suffering decreases in both sales and the operating profit.

Hyundai Motor, which experienced a 7.4 percent on-year drop in sales to 47.2 trillion won in the first half, is the most notable case. The company recently recovered its domestic sales and reduced the maintenance costs, thereby minimizing its loss, and yet it still faced a dramatic on-year decline in its operating profit of 30 percent.

Cash-strapped Doosan Group also faced a simultaneous decline in sales and operating profit. Doosan’s operating profit in the first half was 100 billion won, 87 percent lower than in the same period a year earlier.

Brick-and-mortar retail businesses were also dealt a heavy blow. Lotte Shopping suffered a 8.8 percent drop in sales and an 82 percent decrease in operating profit. Emart’s operating profit decreased by 97 percent. Sales, however, increased by 13.4 percent helped by Emart Traders, a big-box warehouse chain, and the Emart branches that newly opened.

Korea Shipbuilding & Offshore Engineering (KSOE), which is owned by Hyundai Heavy Industries, and CJ CheilJedang reported increases in both sales and operating profit.

KSOE maintained a consistent number of orders for ships, plants and engine machines from last year. The reduction in expenses at a major construction project also contributed to its bottom line.

“We are expecting favorable outcomes in the third quarter from fulfilling orders for Qatar LNG ships,” said a spokesperson for KSOE.

CJ CheilJedang has benefited from the crisis, as the demand for processed food rose domestically and internationally.

The question is whether companies will be able to recover their competitive edge in the post-coronavirus era.

“If companies have been cutting unnecessary spendings, this difficult period will be helpful for the future, but if they have not been able to invest in equipment and talent due to the decrease in sales, they may enter a vicious cycle,” said Shin Se-don, an economics professor at Sookmyung Women’s University.

Some companies chose to increase the budget for research and development (R&D) despite the decrease in sales. Samsung Electronics used 10.6 trillion won for R&D during the first half, a 4.5 percent on-year increase. Hyundai Motor increased its R&D budget by 15.2 percent and LG Electronics by 2.3 percent.

“As the recession continues or passes, the gap can further widen between companies that took a stab at differentiation and specialization and those that didn't,” said Kim Ki-chan, a professor of business administration at the Catholic University of Korea.

Chaebol heads look to bounce back with bold plans for 2021