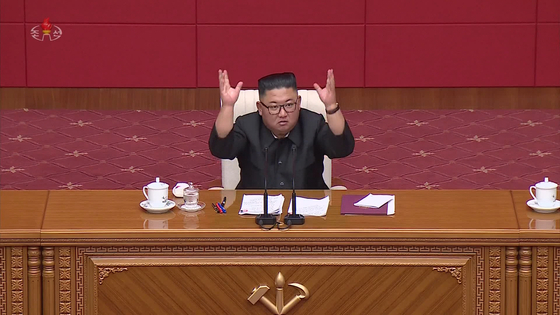 
North Korea will hold a plenary meeting of its ruling Workers’ Party Central Committee on Wednesday to decide on “an issue of crucial significance” about the party’s “fighting efficiency,” state media reported Wednesday.

The Rodong Sinmun, the official newspaper of the North’s ruling party, released an announcement Tuesday saying the decision to convene the meeting had been reached by the Political Bureau of the Central Committee.

No other details were released about the meeting other than it was being held to “discuss and decide on an issue of crucial significance in developing the Korean revolution and increasing the fighting efficiency of the Party.”

Plenary meetings of the Central Committee are some of the most important political occasions for the regime, usually held to formalize major policy changes or decisions.

The last such meeting was held last December, in which North Korean leader Kim Jong-un declared Pyongyang would no longer be bound to a self-imposed moratorium on nuclear and intercontinental ballistic missile (ICBM) tests and would unveil a new strategic weapon.

Yet circumstances for the regime have taken a turn for the worse since, with its economy in tatters owing to continued international sanctions and the coronavirus pandemic.

This month’s intense rains over the peninsula — which caused over 50 casualties in the South — caused havoc in the North’s countryside, damaging around 39,000 hectares of farmland, according to the official Korean Central News Agency.

Wednesday’s plenary meeting also follows a decision reached by an executive policy council of the Workers’ Party on Aug. 5, presided over by Kim, to form a new department within the Central Committee.

Details on what the new division would handle was scant, but a state media report on a Politburo meeting from Aug. 13 said the body will “make tangible contribution to safeguarding the dignity and interests of the state and people, reliably supporting and guaranteeing the political stability and order of the society and impregnably defending our class position and socialist construction.”

Participants in the plenary meeting are expected to ratify the decision to form this new department, as well as other personnel changes already decided by the Politburo.

Kim Tok-hun, an up-and-coming 59-year-old bureaucrat believed to be well versed in the economy, was appointed the regime’s premier, replacing Kim Jae-ryong, who was demoted to Kim Tok-hun’s old position of party vice chairman.

Also notable was the election of Ri Pyong-chol as a member of the Presidium of the Central Committee Politburo.

Ri, an air force general, is believed to be a relative of Kim Jong-un’s wife, Ri Sol-ju.

After entering the dictator’s good graces due to his role in spearheading the North’s strategic weapons development, Ri has surged through the party’s ranks since last year when he was made a deputy chief of the party’s munition department.

In April he was appointed a member of the cabinet before he was made vice chairman of the Central Military Commission in May — a position that was vacant since 2014.

Ri’s appointment to the Presidium of the Politburo, the five-member quorum consisting of the regime’s top leadership, signals Pyongyang’s intent to keep its nuclear weapons and missiles at the heart of its strategic agenda.