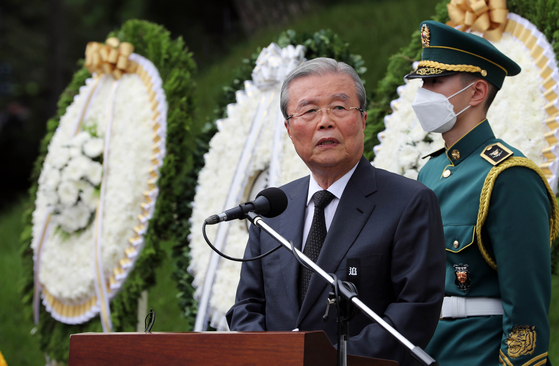 Kim Chong-in, acting head of the United Future Party, gives a speech at the memorial ceremony of the late President Kim Dae-jung at the National Cemetery in Seoul. [YONHAP]


The Blue House on Tuesday expressed optimism regarding opposition leader Kim Chong-in’s willingness to have a one-on-one meeting with President Moon Jae-in.

“We believe it is very fortunate that acting leader Kim of the United Future Party [UFP] had said he can have talks with the president with an intention to give hope to the people in this hard time,” Choi Jae-sung, senior presidential secretary for political affairs, said in an afternoon press briefing. “We hope to start a candid discussion about the format and the agendas of the meeting.”

In an exclusive interview with the JoongAng Ilbo earlier Tuesday, Kim said he is open to a meeting with President Moon under certain conditions. Kim said he would not take part in a photo opportunity organized by the Blue House.

Kim said the meeting should be an exclusive meeting between him and Moon. He also wants specific agendas to be decided before having the meeting and an agreement must be announced after the talks.

On Monday, Choi said the Blue House had proposed a trilateral meeting between Moon, Kim and Chairman Lee Hae-chan of the ruling Democratic Party (DP), but the UFP rejected the offer.

“Choi paid a visit to our chief of staff and ambiguously invited us to have a meal together at the Blue House,” Kim told the JoongAng Ilbo. “Who will agree to such a meeting when the president just makes a vague proposal? There would be no way for me to go to the Blue House for such a meeting.”

Kim told the JoongAng Ilbo that the Blue House appeared desperate to create a political breakthrough as public support for the administration erodes.

In the latest Gallup Korea poll, Moon’s approval rating had plummeted to 39 percent, the lowest ever. In early May, his approval rating was 71 percent. In another poll by Realmeter, the ruling party’s support rate was overtaken by the UFP.

Asked when he will meet with Moon, Kim said he will do so once his conditions are met.

“If they want to have a meeting, they must lay out what they want to talk about and make an official proposal,” Kim said.

He also said it is crucial for him to sit down with Moon alone.

Asked if Kim had formally notified the Blue House of his conditions, a senior presidential aide said they accepted the JoongAng Ilbo interview as Kim’s official stance.

It remains to be seen if Moon and Kim, who share a bitter history, will be able to meet.

After a falling out with Park, then-DP Chairman Moon recruited him in 2016 to lead its general election campaign. At the time, Moon gave him all nomination powers and won the election. 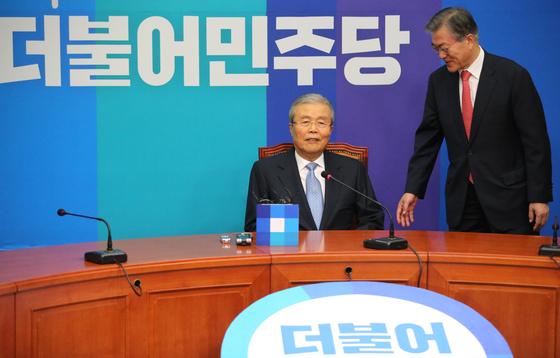 In this file photo, Kim Chong-in, center, sits for a press conference to announce his joining of the Democratic Party on Jan.15, 2016. Moon Jae-in, then the head of the party, stands next to him. [Shin In-seop]


Their alliance, however, did not last long, and Kim left the party in March 2017. Kim initially declared his candidacy for the snap presidential election after Park's impeachment and removal, but later withdrew his bid. Moon won that election in May 2017.

The UFP recruited him to reinvent the party after its crushing defeat in the April general elections. Kim has served as the acting leader of the UFP for the past several months.

Since taking office, Moon had a one-on-one meeting with then-opposition leader Hong Joon-pyo on April 13, 2018. Ahead of his scheduled summit with North Korean leader Kim Jong-un on April 27, Moon requested the opposition party’s support.

Hong’s successor, Hwang Kyo-ahn, has demanded a one-on-one meeting with Moon, but it never materialized. When Moon invited the leaders of five political parties in July 2019, Moon offered a separate dialogue with Hwang on the sidelines of the meeting. Hwang reportedly asked Moon to allow bail for former President Park, who was imprisoned for an abuse of power scandal.