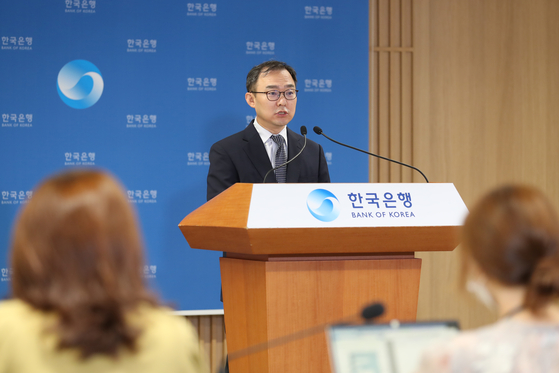 An official from the central bank explains household debt statistics at the Bank of Korea building in Jung District, central Seoul, Wednesday. [BANK OF KOREA]


Household debt hit a new record of 1,637.3 trillion won ($1.39 billion) during the second quarter owing to a rise in mortgage loans and loans for stock exchange investments, the Bank of Korea (BOK) announced Wednesday.

Household debt is the sum of loans and credit card purchases by households, extended by financial institutions.

Loans by financial institutions reached 1,545.7 trillion won during the April to June period, which was a 1.6 percent increase from the previous quarter.

Despite strict real estate measures by the government, mortgages grew to 873 trillion won in the second quarter, more than double the amount from the same period last year.

Loans borrowed to purchase stocks rose by 10.3 percent compared to three months earlier to 7.9 trillion won in the second quarter — the largest increase in history.

Amid the rising numbers, the Financial Services Commission (FSC) plans to monitor banks in a bid to prevent them from lending too much.