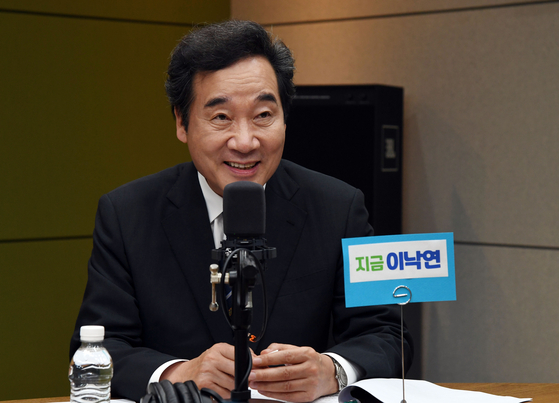 Rep. Lee Nak-yon attends a debate hosted by CBS Radio on Tuesday afternoon. Earlier Tuesday morning, Lee participated in the broadcaster's news program and used the same microphone that a reporter infected with the coronavirus had used. He took a Covid-19 test in the evening and was confirmed negative on Wednesday. [YONHAP]


The coronavirus resurgence in the greater Seoul region has reached the political arena, forcing the ruling party to reduce its national convention to an online event.

The Democratic Party (DP) announced Wednesday that it has changed the venue of its leadership election on Aug. 29 from the Olympic Gymnastics Arena in southern Seoul to the party’s headquarters in Yeouido, western Seoul.

According to Rep. Jang Chul-min, spokesman for the preparation committee, the party will respect the elevated social distancing regulations of the government, which bars indoor gatherings of more than 50 people and outdoor meetings of more than 100.

“We will minimize the number of participants,” he said. “We will make sure no more than 50 people will attend.”

He still left open the possibility that the venue will return to the indoor arena, capable of hosting 20,000 people, while keeping the number of participants to 50. Originally, the party planned to invite 600 members of its central committee from around the nation.

With the venue changed to the headquarters, the DP said the leadership election will become an online event. At the national convention, the party will elect its new chairman and five members of the Supreme Council.

“Aside from candidates of the leadership election, only the staffers crucial for operating the event and a few party officials required by the party constitution to attend the event will participate,” Jang said. “The rest will be a handful of journalists.”

The DP also postponed the Supreme Council meeting, scheduled for Wednesday at 9:30 a.m., to 1 p.m., as Rep. Lee had made contact with a reporter whose infection was confirmed Tuesday. 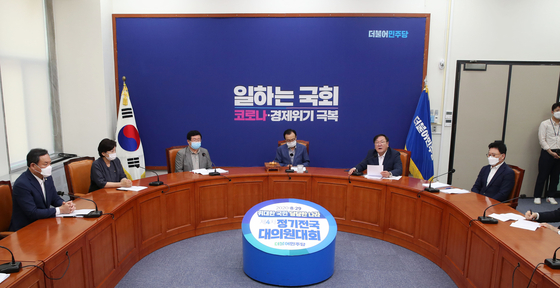 The Democratic Party rearranges the seats for its Supreme Council members to keep a larger distance from one another on Wednesday. [YONHAP]


Lee appeared in a CBS Radio show on Tuesday morning and used a microphone shared by the reporter. After he was informed about the possibility of his infection, he took a coronavirus test around 8 p.m. on Tuesday and went into quarantine.

The political arena was shocked by Lee’s possible infection, as he has actively contacted politicians and officials as he campaigned for the chairmanship.

After appearing in the CBS radio show, Lee attended a memorial event for the late President Kim Dae-Jung and met with many high-profile politicians and senior officials, including Presidential Chief of Staff Noh Young-min.

The DP said Lee was informed by the National Medical Center around 10:10 a.m. on Wednesday that he was not infected.

“I will respect the National Medical Center’s recommendation on how to proceed with public activities,” he wrote in a Facebook message. “I will also consult with the National Assembly and the party.”

While Lee tested negative, CBS shut down its facilities, becoming the first broadcaster to cease operations due to the outbreak. According to the station, the building was shut down for disinfection, and it replaced its regular broadcasting schedule with music for 24 hours, starting on Wednesday at 6 a.m.

A group of 34 people who had contact with the infected journalist took Covid-19 tests Wednesday morning, CBS said. If there are no additional infections, the broadcast will resume on Thursday at 6 a.m. If more patients are confirmed, the network said it will begin "emergency operations."

The DP also indefinitely postponed a press conference to mark Kim Tae-nyeon’s first 100 days as the party’s floor leader. It is also considering rescheduling the workshop for all its lawmakers on Sept. 3.

Former Interior Minister Kim, another candidate for party chairman, shut down his campaign office on Tuesday. The office is in the same building as one of the conservative groups that hosted Saturday’s massive street demonstration. Many participants of the anti-government rally in central Seoul were later confirmed to be infected with the coronavirus.

The main opposition United Future Party (UFP) also said it is respecting the preventive measures and minimized the number of people who accompanied acting Chairman Kim Chong-in on his visit to Gwangju.

The National Assembly postponed a series of meetings, and the Intelligence Committee delayed a briefing from the military and the police to next week.

The Unification Ministry, the Justice Ministry, the Science and ICT Ministry and other government offices also postponed their committee briefings to next week.

The Strategy and Finance Committee held the confirmation hearing for Kim Dae-ji, President Moon Jae-in’s nominee to head the National Tax Service, in the morning as scheduled, but the National Assembly limited the number of lawmakers’ aides and journalists allowed to participate. 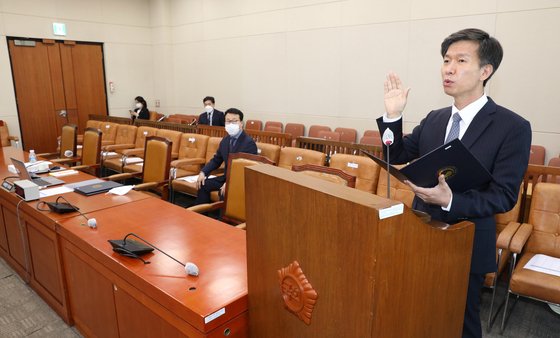 Kim Dae-ji, nominee for the National Tax Service head, undergoes a sworn ceremony before his confirmation hearing on Wednesday. Seats for lawmakers' aides and journalists are nearly empty to maintain the elevated preventive measures. [YONHAP]