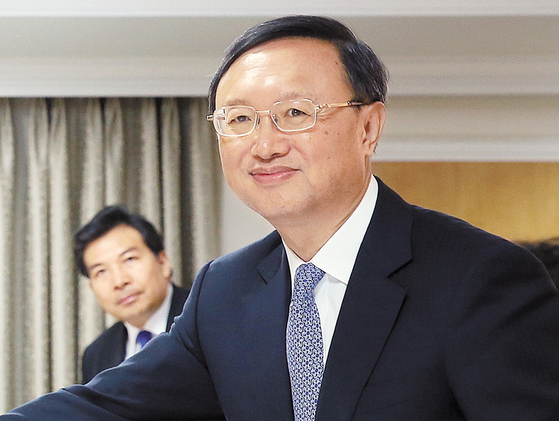 Yang Jiechi, a Politburo member and the director of the Office of Foreign Affairs of the Chinese Communist Party. [JOONGANG PHOTO]

Yang will be the first high-ranking Chinese official to visit Korea since the Covid-19 pandemic.

As the meeting is taking place in the southern city of Busan, Yang is not expected to meet Moon. When Yang last visited Korea in March 2018, he met with Moon at the Blue House. 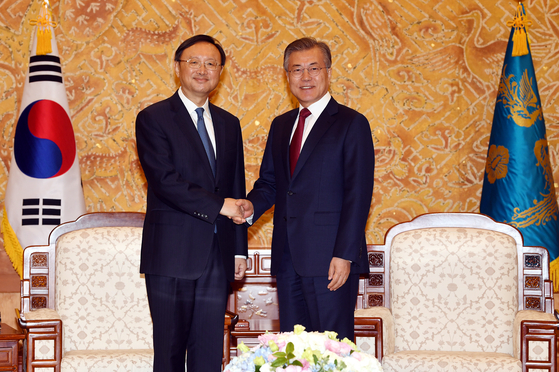 In this file photo, President Moon Jae-in, right, meets with Yang Jiechi at the Blue House on March 30, 2018. [JoongAng Photo]


“The date and venue were decided by taking into account China’s wishes,” a senior presidential aide said. He said the ongoing resurgence of infections in the capital region “has nothing to do with deciding the venue.” He, however, did not explain why Busan was chosen.

The official said a future visit by Chinese President Xi Jinping will be discussed. The Moon administration has been trying to arrange a visit by Xi before the end of this year. After Moon met with Xi in Beijing last December, the Blue House planned a trip for the first half of this year, which was ruined by the coronavirus crisis.

“Xi’s visit to Korea will be decided at an appropriate time after the coronavirus pandemic is stabilized,” the official said.

The presidential aide also said Korea is the rotating chair of the Korea-China-Japan trilateral summit, and Suh will discuss with Yang the fate of this meeting. Korea is supposed to host the summit at the end of this year.

Korea-China relations turned sour in 2016 after Moon’s predecessor, Park Geun-hye, allowed the U.S. deployment of the Terminal High Altitude Area Defense (Thaad) antimissile system in the country. Beijing strongly protested the deployment, which it saw as a threat to its strategic interests, and imposed unofficial economic retaliatory measures on Korea. The two countries have slowly been mending relations.

Yang has been overseeing China’s negotiation with the United States, and he traveled to Hawaii in June to meet U.S. State Secretary Mike Pompeo.

Yang’s visit is taking place at a sensitive time, following a major demonstration of U.S. airpower.

The United States flew six bombers including two B-2 Spirit stealth bombers near the Korean Peninsula on Monday, the U.S. Indo-Pacific Command said Wednesday. It said the move was to show its commitment to defend its partners in the region.

Yang is also visiting Korea less than a month after the Blue House announced on July 28 that the United States agreed to lift all restrictions on Korea's use of solid-fuel rockets.

At the time, Kim Hyun-chong, deputy national security adviser who negotiated the deal, said it was only “in due time” that Washington would lift all restrictions on maximum range, which is the only remaining constraint that prevents Seoul from making an ICBM.

The Hyunmoo-4, Korea’s most advanced ballistic missile, has a maximum distance of 800 kilometers (500 miles), enough to hit any target within North Korea. According to one government source, the United States did not lift the range restriction this time due to concerns over China's reaction.