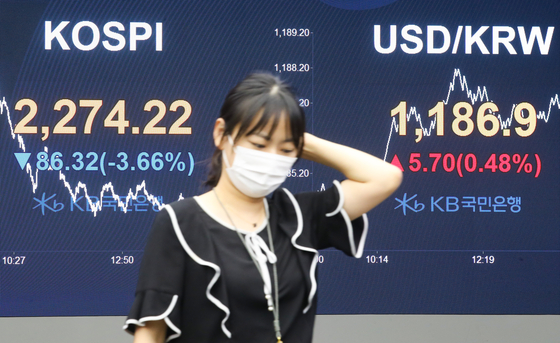 A screen shows the closing figure for the Kospi in a trading room at KB Kookmin Bank in the financial district of Yeouido, western Seoul, on Thursday. [YONHAP]


Stocks tumbled more than 3 percent Thursday amid growing concerns over an increase in the number of coronavirus cases in the country and uncertainties over the recovery of the U.S. economy. The won fell against the dollar.

Stocks got off to a weak start and extended losses in the afternoon session amid spiking Covid-19 infections in the greater capital area.

Korea added 288 new cases of Covid-19 on Thursday. More than 1,500 cases have been newly identified since Friday.

Lingering trade tensions between the United States and China also added to the risk-averse sentiment among investors.

The local currency was trading at 1,186.9 won against the dollar, up 5.70 won from the previous session's close.

Looking back on 'a year of extreme extremes' for Wall Street