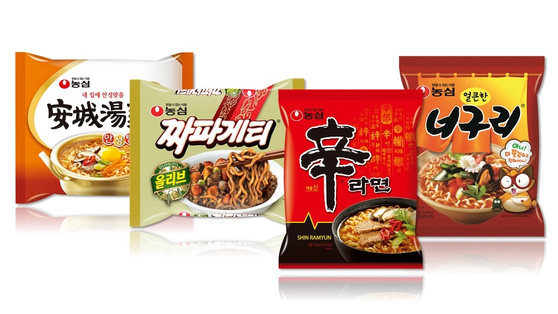 
The instant noodle market is growing fast and changing quickly as the pandemic has started to convince people that the humble snack could make a righteous meal.

“As more people spend time at home, home-cooking has become commonplace. People are starting to view instant noodles as more of a meal than a snack,” said a Nongshim spokesperson.

In Korea, the instant noodle market grew 7.2 percent in the first half on year to 1.13 trillion won ($952 million), according to Nielsen. It based its calculation on the sales of the four largest instant noodle companies in Korea: Nongshim, Ottogi, Samyang Foods and Paldo.

The classics beat the younger brands, with sales concentrated in names decades in the market. According to the report, so-called steady-seller products — Shin Ramyun, Chapagetti, Ansungtangmyun and Neoguri — led.

Chapagetti sales rose 23.3 percent on year, and Neoguri's were up 28.4 percent. The brands are Nongshim products and were featured in Oscar-winning film "Parasite" (2019). Other Nongshim products did well. Sales of Ansungtangmyun grew by 34.9 percent and Shin Ramyun by 12.4 percent.

While the oldies but goodies did well, the market has changed in a number of ways. Customers are now buying more of the product online. Around 40 billion won worth of instant noodles were sold through Nongshim’s online channels in the first half, which is double that for the same period last year.

This is a huge shift in consumer behavior, says a Nongshim spokesperson, as instant noodles are usually purchased through shops near customer’s homes, such as large discount stores, convenience stores and supermarkets.

Another change is the preference for plastic-bag-packaged noodles. Instant noodles packaged in plastic bags have been losing popularity since 2016 as more people live alone and convenience stores become more accessible.

At the end of 2019, 62.5 percent of noodles were sold in plastic bags, but that rebounded to 65.7 percent of sales in the first half of this year. Demand for cup noodles declined as more people started avoiding outdoor activities.

Four companies dominate the Korean instant noodles market, according to Euromonitor. Nongshim was the No. 1 player as of February with 52.3 percent of the market. Ottogi has 23.1 percent, Samyang 11.3 percent and Paldo 8.9 percent.