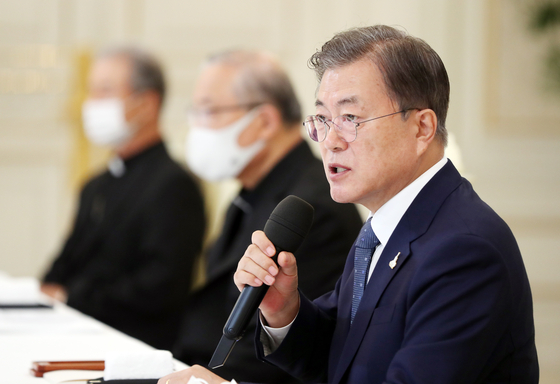 President Moon Jae-in speaks at a luncheon with Catholic leaders at the Blue House on Thursday. Moon invited the leaders to thank them for their cooperation in the coronavirus outbreak. [YONHAP]


After weeks of declines, the approval ratings of President Moon Jae-in and his ruling party rebounded as the country battles with a coronavirus resurgence, a poll showed Thursday.

According to a Realmeter survey, Moon’s approval rating was 45.1 percent this week, up by 1.8 percentage points from the previous week. The poll, commissioned by TBS, took place on Tuesday and Wednesday with 1,506 respondents nationwide.

According to the poll, the presidential disapproval rating was 52.3 percent, down by 0.3 percentage points.

The ruling Democratic Party (DP) recorded a 38.9 percent approval rating, up by 4.1 percentage points from the previous week.

The polling company said the spread of coronavirus infections in the capital region — partly as a result of conservative groups’ street protests on Saturday — contributed to the improving popularities of Moon and the DP.

“The government and the ruling party’s measures to control the outbreaks positively affected the DP’s approval rating,” Realmeter analyzed.

“The UFP’s popularity, however, was stalled as some associated the party with the [Saturday] rally," it said.

In the two previous polls, results of which were announced on Aug. 13 and 17, the UFP’s approval rating had overtaken that of the DP for the first time since the 2016 political scandal that led to President Park Geun-hye’s removal from office.
Last week, the UFP’s rating was 36.3 percent, while the DP’s rating was 34.8 percent.

While public support for the ruling party went down in the two previous polls, it rebounded this week. The UFP maintained its upward trend for three consecutive weeks, although it fell behind the DP this week.

More information about the poll is available on the websites of Realmeter and the National Election Survey Deliberation Commission.