“What do you wonder most about the future?”

That was the question President Moon Jae-in was asked by a teacher after he sat down with a math class at a girls’ middle school in downtown Seoul Tuesday.

Whether he intended to be funny or not, there is a grain of truth in every joke. One thing is sure: real estate must be dominating the president’s thoughts. Or, it could have been a Freudian slip, exposing his deep frustration — and anxiety — over the perverse results of his administration’s 23 sets of real estate stabilization measures. His bravado could have come from self-conviction — or wishful thinking.

Moon’s apprehension is understandable, given all his devotion to real estate politicking. Every government and political party has the obligation to try to stabilize the real estate market. Kim Soo-hyun — the president’s former policy chief and architect of his real estate policy — said, “A government would have to stake its soul, if necessary, to fight housing speculation.” The 23rd package revealed in July could have derived from the lessons learned from the mistakes of the Roh Moo-hyun administration, which also grappled with real estate issues and in the end, lost power to the conservative front. The Moon administration is determined to not hand over power to the opposition as a result of a failed housing policy. Still, the episode at the school shows he is unsure and wonders about the future of real estate. 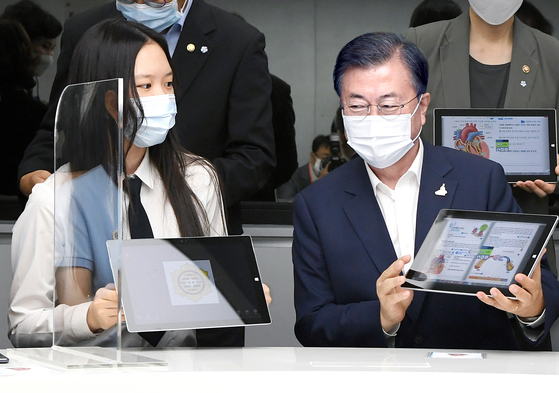 President Moon Jae-in talks with a student at Changdeok Middle School in central Seoul on Tuesday. When a teacher asked him what he wondered most about the future, Moon immediately replied, ’real estate.“ [JOINT PRESS CORPS]


Actually, the math teacher at Changdeok Middle School had an answer for the president. He said the future can be projected after studying patterns in a graph. He was advising a scientific approach to real estate, not a political one. Real estate measures can be devised from the examination of the numbers. But the government employed data to fit its policy. When announcing a new set of measures, it did not even disclose the guidelines or process. As a result, the government could not draw a precise graph and find reliable patterns to foresee the future.

Land Minister Kim Hyun-mee claimed that residential real estate prices rose by 11 percent on average during the three years under the Moon Jae-in government, defying a finding from the Citizens’ Coalition for Economic Justice (CCEJ). Kim insisted on the legitimacy of using “state statistics.” Her data came from the Korea Appraisal Board. The state entity’s samples of surveyed households are less than half those compiled by primary housing lender KB Kookmin Bank — and its frequency of surveys is just a fourth of KB Kookmin Bank’s. Even commercial banks refer to KB Bank’s data in loan reviews. The president claimed that housing prices began to stabilize from last week, based on the 0.02 percent gain cited in the Korea Appraisal Board data. In KB Bank data, the rise was 0.53 percent, increasing faster than the 0.39 percent gain the previous week.

Real estate policy should be based on trust. A public policy without public trust is bound to fail. Credibility comes from numbers. Important data should be examined and approved by experts, the media and National Assembly. Transparency is a must. It cannot be a normal government if it selects data and numbers to serve its political purpose or refuses to disclose its methodology or process. No wonder the president is so uncertain about the future.

One loophole after another (KOR)