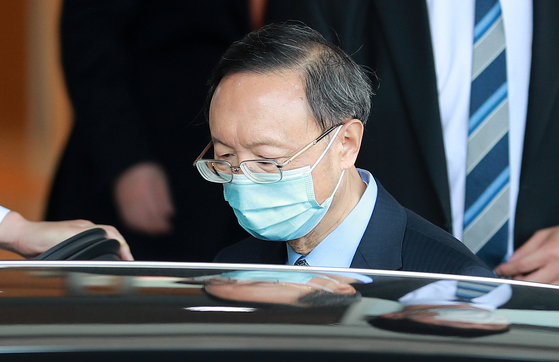 Yang Jiechi, a member of China's Politburo and director of the Chinese Communist Party's Office of Foreign Affairs, arrives at Gimhae International Airport of Busan on Friday. [YONHAP]

Yang, who is director of the Chinese Communist Party's Office of Foreign Affairs, will meet with Suh, director of the Blue House’s National Security Office, on Saturday morning, Korean government sources said. He is the first high-ranking Chinese official to visit Korea since the Covid-19 pandemic started.

According to the Blue House, a future visit by Chinese President Xi Jinping will be discussed at the summit. Since Yang is visiting Busan, not Seoul, it is unlikely that he will meet with Moon.

“There are many sensitive pending issues between the two countries, but there had not been enough preliminary discussions,” Professor Kim Heung-kyu, director of the China Policy Institute at Ajou University, told the JoongAng Ilbo. “This must be why they are meeting in Busan. It seems that they want to keep the meeting as low profile as possible.”

“It seems that he is trying to avoid a meeting with Moon, based on the political intention that Seoul does not want to provoke Washington and Beijing doesn’t want to upset Pyongyang,” said Professor Moon Heung-ho, dean of the Graduate School of International Studies and director of the Institute for Chinese Studies at Hanyang University.

Ahead of his visit to Busan, Yang visited Singapore on Wednesday and Thursday and met with Singaporean Prime Minister Lee Hsien Loong.

“China is willing to cooperate with Singapore and other Association of Southeast Asian Nations [Asean] members to deepen strategic mutual trust and pragmatic cooperation and to make concerted efforts with them to safeguard economic globalization and fairness and justice in the international arena,” Yang was quoted as telling Lee on Thursday by China’s Xinhua News Agency.

Korea-China relations soured in 2016 after Moon’s predecessor, Park Geun-hye, allowed the United States to deploy a Terminal High Altitude Area Defense (Thaad) antimissile system in the country. Beijing strongly protested the deployment, which it saw as a threat to its strategic interests, and retaliated economically. The two countries have slowly been mending relations.

In 2017, the United States unveiled the Free and Open Indo-Pacific (FOIP) strategy, which China sees as an attempt to contain its rising power and regional influence, but the Moon administration has been slow to embrace the concept.

It is expected that Yang will demand Seoul’s support for Beijing in the escalating U.S.-China military, political and trade conflicts — or at least maintain its neutrality.

When the UN Human Rights Council became the arena of dueling international responses to China’s national security law over Hong Kong in June, Seoul kept its silence and did not endorse any side. At the time, 27 countries signed a statement to condemn the law, while China rallied 53 countries, including North Korea, to back it.

Yang’s visit comes as Korea and the United States hold joint military exercises, though that have been scaled back due to the coronavirus outbreaks.