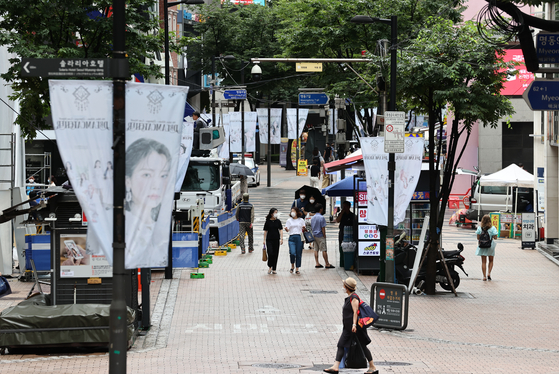 Korea added 332 new infections of the coronavirus Friday, the highest figure since early March, as the virus rapidly spreads across the country. All 17 major cities and provinces saw at least one new Covid-19 case, including Jeju Island.

Among the local infections, 127 were in Seoul, 91 in Gyeonggi, 21 in Incheon, 16 in Gangwon, nine each in Daegu and Gwangju, eight in South Gyeongsang, seven in South Jeolla, six in South Chungcheong, four each in Daejeon, North Jeolla and North Gyeongsang, three in Busan, two each in North Chungcheong and Jeju Island, and one each in Ulsan and Sejong City.

Of the imported cases, four each were from the Philippines and India, three from the United States, two from Japan and one each from Qatar, Egypt, Senegal and Ethiopia.

No patients died Friday, leaving the total number of deaths at 309. Forty-nine people recovered, bringing the total recoveries to 14,169.

Minister of Health and Welfare Park Neung-hoo declared in a public address Saturday that the entire nation will have its three-tier social distancing levels raised to Level 2, effective Sunday.

Seoul, Incheon and Gyeonggi already saw levels raised from Level 1 to 2 earlier this week shortly after a virus cluster at the Sarang Jeil Church in Seongbuk District, central Seoul, began to spiral out of control.

Several “high-risk” businesses will be closed, including clubs, bars that involve dancing and table-hopping, or moving between tables to mingle with others, door-to-door sales businesses, large hagwon (private cram schools) with 300 students or more, buffets, noraebang (singing rooms) and internet cafes.

All sports games, including football and baseball, will go back to the no-spectators rule. Public institutions such as museums and libraries will close, and civil servants will work on staggered schedules, while private companies will also be recommended to space out their employees as well.

Violators can face fines of 3 million won ($2,500) and additional charges.

Grace periods between one and three days will be offered for some measures, health authorities said. High-risk businesses that will have to shut down, for instance, have up to Monday to close.

Compulsory measures in the Level 2 system will only be recommendations without enforcement for North Gyeongsang and Gangwon, given their slow spread of the virus.

Park called Korea’s current situation a grave one, saying secondary and tertiary transmissions from the Sarang Jeil Church and last week’s antigovernment demonstration are expected to “really start spreading” from this weekend, saying there’s a high chance Korea may experience a recurrence of steep spikes in daily infections like last March, when a cluster at the Shincheonji Church of Jesus in Daegu led to hundreds of more day-to-day increases.