[TEST DRIVE] She's conquered Europe, but can Zoe make it in Korea?

[TEST DRIVE] She's conquered Europe, but can Zoe make it in Korea? 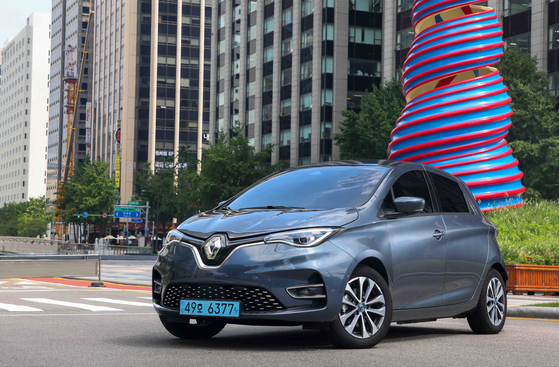 
In terms of performance and cost effectiveness, Renault’s Zoe has nothing left to prove.

The electric vehicle (EV) has already captured the hearts of European drivers, becoming the best-selling EV in the first half of this year with more than 36,000 units sold and beating the Tesla Model 3 by 3,000 cars.

Accumulated sales as of June 2020 reached 216,057 units in Europe, topping the chart, followed by Nissan’s Leaf and Tesla’s Model 3.

So the question isn't if Zoe is a good car — it's already proven quite decisively that it is — it's whether this quirky hatchback can make it in Korea's competitive EV market, where drivers tend to show vastly different preferences to their European counterparts.

The short answer is maybe, although it won't be easy.

To provide a longer answer, the Korea JoongAng Daily took the Zoe for a spin on a 20-kilometer (12-mile) route around Seoul on Aug. 20.

Driving the Zoe, it's immediately clear the car is good value for money, in terms of both the purchasing price and driving range. Its performance, however, had good and bad moments.

Despite its compact-looking exterior, the front row was actually surprisingly spacious.


Adjusting the seat, however, had to be done in the old-fashioned way, by pulling a lever located under the seat and turning a wheel on the side. It's been some time since digital buttons replaced those manual controls in many non-luxury cars, and it comes off as a bit of a surprise that Renault decided to leave them out of the Zoe. Moving the seat up or down is not an option.

In terms of the driving experience, Zoe does take some time to get used to. Renault Samsung Motors markets the car as having a similar feel to driving an internal combustion-powered vehicle, which seems to be the trend these days, but Zoe definitely feels like an EV.

Like many EVs, acceleration and braking feels a little abrupt. The sudden stops felt more disturbing on the first part of the course in central Seoul, where the heavily-congested roads mean drivers are inching forward and braking every few seconds. Further out on the hilly roads of the Bugak Skyway, the real value of the Zoe becomes a lot clearer.

The compact hatchback, which is able to drive 309 kilometers per charge, was showing a remaining range of 205 kilometers when we started to drive on the Skyway at the bottom of Bugak Mountain. By the top, it still showed about 201, and on the way back down the mountain, the number of kilometers left actually climbed up to 217.

The car's B-Mode, which activates the regenerative mode, saves kinetic energy back into the battery, creating an extremely efficient vehicle. The mode is especially helpful when going downhill because the car will allow gravity to do the hard work while it saves energy for the rest of the journey.

B-mode wasn’t uncomfortable, even though it meant controlling the car's speed only with the accelerator. Unless the road got too curvy or steep, there was no need to hit the brake.

When the hilly course finished I decided to keep the regenerative brake mode on, which actually turned out to be easier even on congested, flat roads.

Regenerative braking provides a much smoother and gentle deceleration than stepping on the brake. In fact, if I owned the Zoe, I can't imagine if I would ever turn the B-mode off.

Renault Samsung Motors emphasized that the car is suitable for urban driving and longer journeys if there are abundant chargers around.

For this reason, it also upgraded the brand’s app to enable Zoe drivers to more easily find charging stations.

The upgraded app lets the driver decide things like how much time they can spare for charging — to decide whether they need a rapid charger or not — and how much they need to charge the battery.

Renault’s Zoe is the perfect EV for big city life