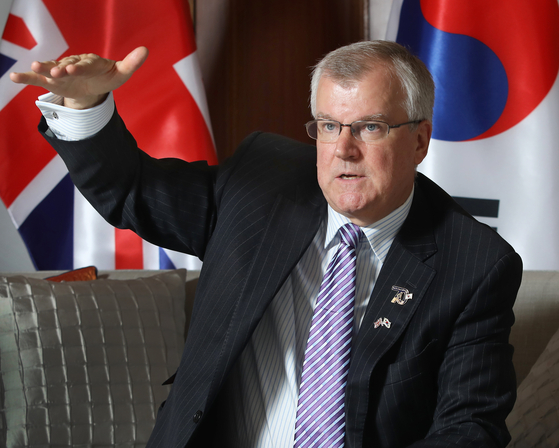 British Ambassador to Korea, Simon Smith, speaks with the Korea JoongAng Daily at the diplomatic residence in central Seoul on Aug. 11. [PARK SANG-MOON]

Thoughts of family and home are often dear to those fighting overseas, and the British soldiers stationed thousands of miles away in Korea as Christmas approached in 1952 were no exception.

“Give my love to my best friend, Chris, Sheila and John and tell them I hope Father Christmas brings them what they want,” wrote Paul Burke, an 18-year-old British soldier, in a letter to his parents upon his arrival in Busan in October 1952.

Burke wrote dozens of letters home during his 18 months of service in the Korean War (1950-1953), some of which he and his family donated to the National Archives of Korea last year.

In one of the documents submitted by Burke, it was evident that even the Chinese and North Koreans on the other side knew just how precious that time of year was for the British soldiers.

“It is 28 months since the Yanks dragged Britain into this war,” begins a letter addressed to British soldiers by the Korean People’s Army and the Chinese People’s Volunteers, that Burke had received in October 1952. “Is it not quite plain — that only peace will put a stop to further, unnecessary casualties for all you lads [… and] give you the chance of spending Christmas along with your dear ones.

“Friends! Don’t fight for the Yanks any more! Without you, they cannot keep up this war!”

Despite it being propaganda, the letter's last sentence wasn't untrue.

Britain deployed 56,000 soldiers during the Korean War, the second-largest force after the Americans, and also the second ally to see action in battles, with the first group of forces arriving within a week of the United Nations’ call for assistance.

“With the UN resolution on the 27th of June, just six days later, British aircraft were in action over North Korea, carrying out bombing raids on the Haeju airfield. That was essentially the first military action carried out by the British troops in the war,” said Simon Smith, British ambassador to Korea.

With the arrival of the 27th Infantry Brigade near the end of August in 1950, British forces were deployed on the ground at the front lines, ready to hold back the Chinese forces when they began their big offensive in October that year.

Engaging with the Chinese communist forces for the first time at the Battle of Bakcheon in November 1950 in today’s North Korean territory, North Pyongan Province, the British forces fought alongside forces from New Zealand, Australia and Canada, who altogether formed the British Commonwealth Forces in Korea. They continued to play key roles in resisting the Chinese offensives in the Battle of Goyang in January 1951, northwest of Uijeongbu, Gyeonggi; the Battle of Jeokseong in April 1951 near the Imjin River in Paju, Gyeonggi; and in the Battle of Gapyeong in April 1951 in Gapyeong County, Gyeonggi.

Their victories came at high costs.

“It was April 1951 at the Imjin River. Some 10,000 Chinese forces were advancing across the river, which was just waist-high at the time,” Smith said. “Across the river were some 1,000 British soldiers of the 29th Brigade. Over the next four or five days there was very fierce fighting — the British units actually retreated very slowly, but every time they retreated to another operational post, they again fired back on the Chinese. So all the time they were trying to slow down the Chinese advance. In the end, a large proportion of the British forces were either killed or captured and taken to North Korea.”

A total of 978 British soldiers were taken captive during the war, and at least 305 remain missing in action. The story of one of them became well known in Britain.

“One of the individuals who was involved in the battle of Imjin River was Lieutenant Terry Waters,” Smith said. “He was taken away to the North and the North Korean army at the time tried to persuade the prisoners to say something like 'communism is really great,' to boost their propaganda. They would then let those who follow this order live.

“Lieutenant Waters is said to have told his soldiers, ‘I am your commanding officer, and I am going to give an order — you must do what they ask you to do. I will stay here and take the punishment.’ He was just 22 years old at the time,” Smith said. “His story became known through the survivors.”

For some soldiers, because they had sacrificed so much, seeing the demarcation line agreed at the end of the war close to where it all started brought some feelings of disappointment.

“The Duke of Wellington's Regiment, along with other supporting units, were involved at the Third Battle of the Hook,” said Victor Swift, who served from April 1953 to June 1954 as a corporal in the Royal Electrical and Mechanical Engineers. “Heavy shelling and mortar fire was experienced. Sadly, when the cease-fire agreement was made, the area became the demarcation zone and we moved back to what was to known as the Kansas line, which was open, flat land — very difficult to defend.” 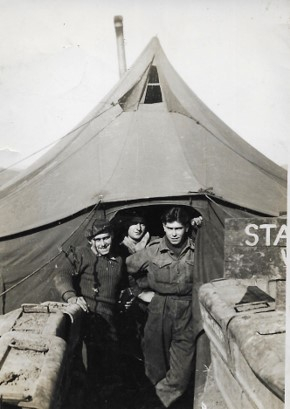 Victor Swift, who served from April 1953 to June 1954 as a corporal in the Royal Electrical and Mechanical Engineers Corps, far right, in this photo taken just south of the Pintail Bridge over the Imjin River in 1953. [VICTOR SWIFT]


Britain's decision to join the war was not made on a whim, however. Britons knew too well the devastation of war by the time they deployed to Korea, being only five years removed from the horrors of World War II.

“It was not so long before this, that Britain had to respond to serious aggression in Europe and to aggression on the part of an undemocratic country and an aggressive authoritarian regime,” Smith said. “I think the key reason why the British government at the time said we can’t just sit back and let it pass was because it was still so fresh in our memories, that there was only one answer to an act of serious aggression by an authoritarian state.”

But for the veterans of the Korean War, their efforts were not in vain.

“My memories of Korea during the war years were of the smell of human-fertilized paddy fields, and the abject poverty of its people,” said Alan Guy MBE, who served from January 1952 to September 1953 as a sergeant in the Royal Army Medical Corps. 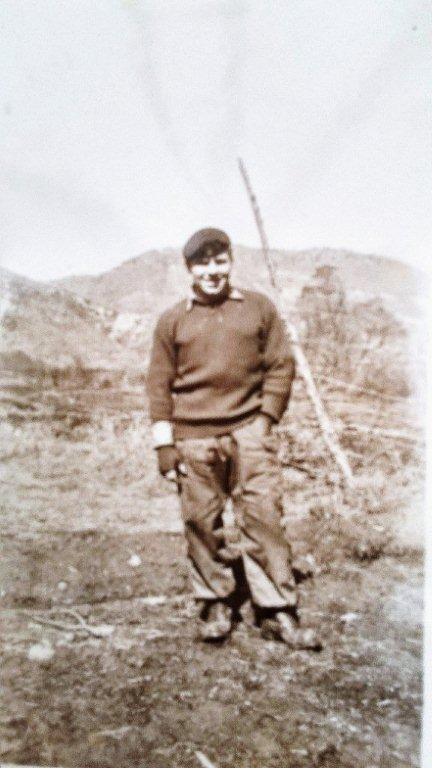 Alan Guy MBE, who served from January 1952 to September 1953 as a sergeant in the Royal Army Medical Corps, during his service in Korea. [ALAN GUY MBE]


Nineteen years old when he first came to Korea, Guy witnessed not only the Koreans' quality of life, but also that of the soldiers on the front lines.

“My role was in the prevention of disease among all troops in the front line areas,” he said. “There was malaria, frostbite, hemorrhagic fever, among others.”

With his memories of Korea occupied with diseases, frigid winter temperatures and accidents on roads decimated by shell holes, Guy did not expect to find Korea so different in just four decades. He returned to the country in 1996, again during Queen Elizabeth II's 1999 state visit and once more in 2001.

“I was amazed at the transformation which was due to the magnificent effort of the people of Korea,” he recalled. “We were taken to the ambassador’s home in Seoul where we were each introduced to the Queen and Prince Phillip and watched as Her Majesty planted a tree within the grounds. A very proud and unforgettable moment for us all.” 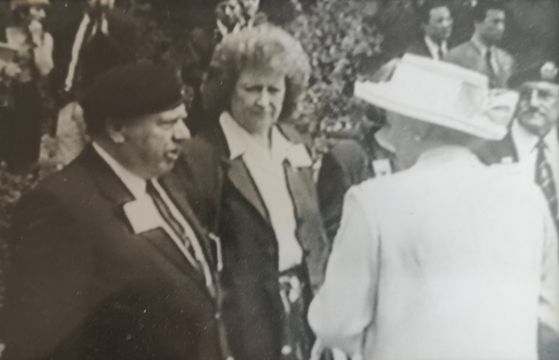 Alan Guy MBE, who served from January 1952 to September 1953 as a sergeant in the Royal Army Medical Corps, meets Queen Elizabeth II during her visit to Korea in 1999. [ALAN GUY MBE] 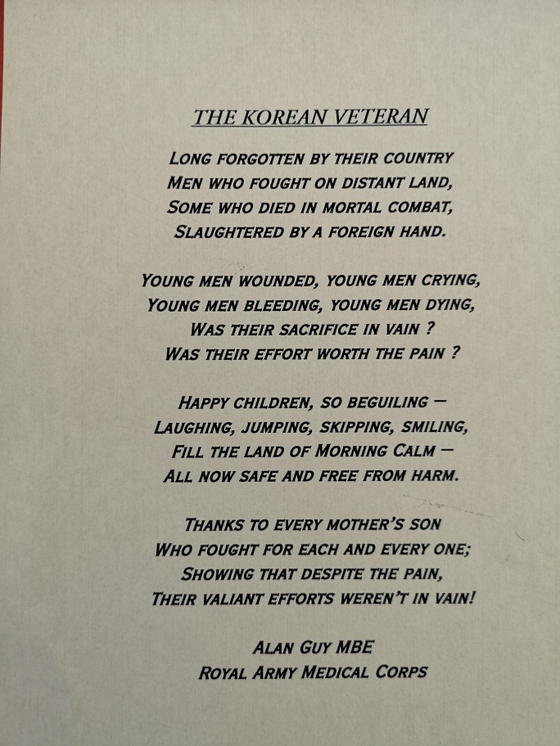 Alan Guy MBE, who served from January 1952 to September 1953 as a sergeant in the Royal Army Medical Corps, wrote a poem following his return to Korea. [ALAN GUY MBE]


Swift, the corporal from the engineers' corps, added, “I have revisited Korea in 2011 and 2018 and [was] taken aback by the amazing achievements that have taken place. The sacrifice was not in vain.”

The Korean War has often been dubbed the “Forgotten War” for having been sandwiched between other major wars. The title is not something entirely negative, however, Smith said.

“I think 'Forgotten War' has been a good expression because it puts people on the spot to say, 'Wait a minute, I haven’t forgotten it' — or asks people the question, 'Do you think it’s right that there are forgotten wars?' And if you don’t think that’s right, what should we do about it?” Smith said. 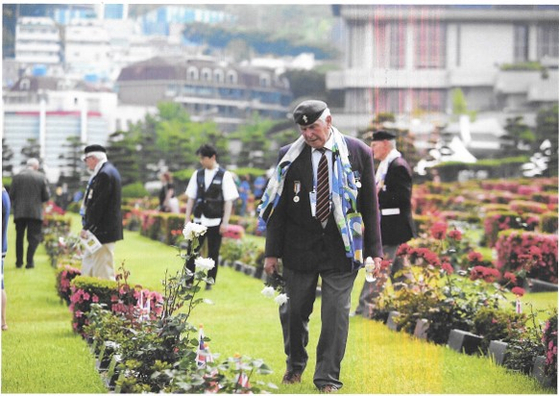 Victor Swift visits the United Nations Cemetery in Busan during his return to Korea in April 2018. [VICTOR SWIFT]


In Smith's case, even though he was born after the war, stories of British bravery during the war told by people who haven’t forgotten it made a deep impression on him.

“I had a teacher in primary school who had participated in the Korean War,” Smith said. “I was 9 years old at the time. Being boys that age, we were quite obsessed about wars and mainly about World War II. My teacher was quite keen to remind us that after WWII, thousands of British servicemen had to fight in the war in Korea. He was the first person to tell me about William Speakman and paint the picture of how he charged into the enemy’s line with grenades to take out their machine gun battery. It was the first moment in my memory when details of a war — its atrocities and dangers — became very real for me.”


Forty years later, Smith would become closely involved with the establishment of the British diplomatic ties with North Korea in 2000.

“I was head of the department in the foreign office in London responsible for relations with both South Korea and North Korea that was right at the first few years of the diplomatic relations with North Korea,” Smith said. “I do feel a great sense of what an opportunity that North Koreans have missed by not listening to our messages to say we are prepared to cooperate. If you take the 1970s, say, as the starting point, and if you see how much South Korea has changed since then with how much North Korea has changed so little, you see the extent. Unfortunately, if they continue to confront the international community, we have no alternative but to demonstrate that there is a cost to this.” 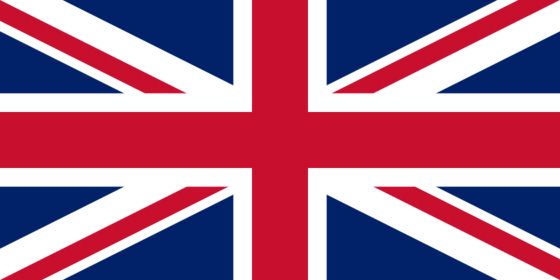 Britain
Britain deployed 81,084 servicemen during the Korean War, of whom 56,000 were soldiers and navy officers in military action, according to the Korean government. A total of 1,078 British were killed in action and 2,674 were wounded in action according to the UN Command. At least 305 went missing in action, according to the British government. Britain's first military action during the war was on July 3, 1950, when Seafire and Firefly aircraft took off from HMS Triumph to attack the North Korean airfield at Haeju. The last of British forces deployed for the war departed in 1956.