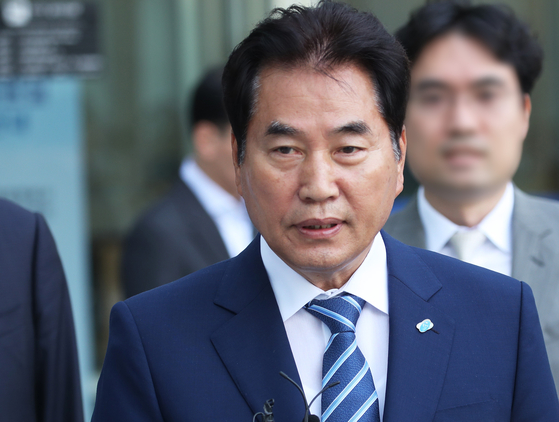 According to the Citizens' Coalition for Economic Justice on Thursday, Yongin Mayor Baek Gun-gi, a politician affiliated with the ruling Democratic Party, owns 14 homes. [YONHAP]


Sixteen of the 65 local government heads in the capital region own more than one home, with many of them members of President Moon Jae-in’s ruling party, despite his hardline policy on multiple home ownership.

The Citizens' Coalition for Economic Justice (CCEJ) held a press conference on Thursday and announced its analysis of 65 elected heads of local governments in Seoul, Incheon and Gyeonggi. One mayor, a member of Moon's Democratic Party (DP), owns 14 homes, it said.

“According to our analysis of their assets made public in the government gazette reports, 24 percent of the 65 officials own more than one home,” a statement released by the CCEJ said.

As a part of its battle against skyrocketing real estate prices, the government has pushed forward strict policies to penalize multiple homeowners while restricting loans and increasing supply. Moon also replaced top officials at the Blue House whose lucrative real estate investments have embarrassed the administration.

The Blue House has vowed to have no senior presidential aides who own more than one home. Government ministries and the DP have also followed suit, but the local government heads, elected in 2018, apparently remain outside the movement.

Mayor Baek Gun-gi of Yongin, Gyeonggi, is reported to have 14 homes. Baek owns an apartment in Seoul’s Seocho District, southern Seoul, and his wife owns 13 homes in Yongsan District, central Seoul. Although he is the mayor of Yongin, he does not own a home in the city, the CCEJ said.

According to the CCEJ, Baek reported to the government that he and his wife together own more than 4 billion won ($3.37 million) worth of properties.

Seo Cheol-mo, mayor of Hwaseong, Gyeonggi, owns nine properties. He owns one house in North Chungcheong and eight apartments in other cities including Goyang and Gunpo, both in Gyeonggi. His properties are worth 1.4 billion won.

All five are members of the DP. They together own 34 homes.

According to the CCEJ, Kim Young-jong, head of the Jongno District Office in central Seoul, is the richest in real estate. He owns 7.6 billion won worth of properties. He is also a DP member.

The CCEJ said the wealth of the 35 local government heads who own apartments or officetels — dual-purpose commercial and residential units — largely profited from their investments in recent years. Since Moon took office in May 2017, the average price of their properties went up by 290 million won, or 41 percent.