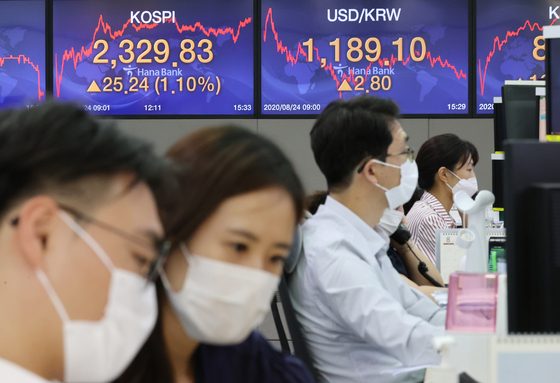 A screen shows the closing figure for the Kospi in a trading room at Hana Bank in Jung District, central Seoul, on Monday. [YONHAP]


Stocks gained Monday for a second consecutive session as investors continued to look for deals despite the resurgence of coronavirus cases nationwide. The won fell against the dollar.

Investors seem to be leaning toward bargain hunting of large caps after a 3.66 percent plunge last Thursday, analysts said.

"In a time of adjustment, investors tend to pour even more cash into undervalued stocks," said Hwang Se-woon, a senior researcher at the Korea Capital Market Institute.

However, analysts warned that the local financial markets are still facing high uncertainties amid spiking Covid-19 infections in the country.

Health authorities warned that the country may have to raise the current Level Two social distancing scheme to the highest Level Three if the spread continues this week.

Under Level Three, public gatherings with 10 or more people are banned, and restrictions are imposed on schools, cafes, movie theaters and wedding halls.

The local currency closed at 1,189.1 won against the U.S. dollar, up 2.8 won from the previous session's close.

Stocks gain for a 6th day after dovish Fed comments