Companies are increasingly worried about employees suffering from the so-called corona-blues — a new piece of corporate lingo combining a shortened form of the word "coronavirus" and "blues."

Office workers are losing their sense of belonging to their companies amid dismal business performances, uncertainties in the labor market and frequent stay-at-home orders. This brings on depression and fatigue — which is only getting worse with the recent uptick in cases in Korea.

In the case of SK Innovation, the refinery arm of SK Group, the number of employees taking advantage of its in-house counseling increased by 28 percent in recent months compared to the same period last year.

“As more employees are sent to work at home, more are seeking professional help for concerns and psychological problems that usually would have been resolved by interacting with other co-workers,” said Kwak Mi-seong, a counselor at SK Innovation.

“Not only are they stressed about work, many are suffering from an identity crisis,” she added.

On July 17, the company premiered a new program on its YouTube channel to cheer up employees. Called "Sik-hoo ttang" or "After Lunch," the program is a cross between a talk show and a filmed podcast and airs at the end of the company’s lunch hour at 12:40 p.m. every Friday.

Two employees act as hosts, and one employee is the guest. The guest shares life problems of any sort, from conflicts between colleagues to lifestyle decisions.

After four episodes, the company started to notice that many employees seemed hooked on the sense of connection. The company said more than 100 employees participate in the show’s live chat room.

According to job portal Incruit, 69.2 percent of 805 office workers it surveyed said they had suffered from anxiety and depression after the coronavirus pandemic broke out.

Some companies are giving surprise gifts to their employees. 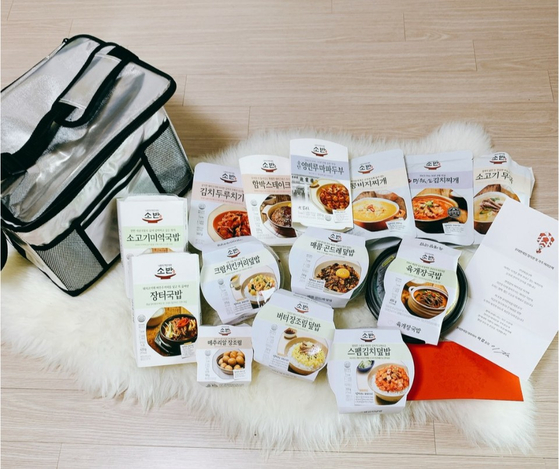 Lee offered a message of support. “The company is able to withstand such hard times thanks to the many employees who are doing their best effort in their respective places," he wrote. "We hope the gifts, at least for a short amount of time, bring happiness to the employees and their families.”

The company said it decided to give food to support young employees having to eat alone at home. The food is also useful for camping, the hot vacation idea during the pandemic.

Samsung Electronics gave out similar gifts to some 30,000 households with connections to the company in the Daegu and North Gyeongsang region, where the coronavirus was concentrated in March.

Amorepacific started a program providing professional psychological support for employees. They can receive professional help as well as take part in various activities to relieve stress, including art therapy and physical activities. Anything discussed between the counselors and employees will be kept confidential.

For some companies, the pandemic has taken such a toll that they can't consider such new initiatives.

The airline business has been particularly hard hit. Many employees of low-cost carriers such as Jeju Air have been furloughed for indefinite periods. There are also very large companies that do not have the luxury of worrying about their employees’ mental health.

“More employees have been suffering from stress after the pandemic broke out, but we cannot afford to come up with a program for them. Our survival is the most important issue at hand,” said one executive of a large company.

SuperM performs for WHO's 'The Big Event for Mental Health'