Mask sales shoot up as shoppers start to stockpile

Mask sales shoot up as shoppers start to stockpile 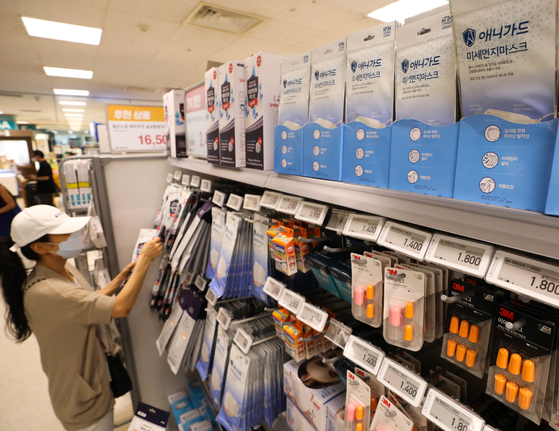 A customer shops for masks at a discount mart in Seoul on Aug. 20. Demand for masks has started to increase after a recent spike in Covid-19 cases. [NEWS1]


Sales of masks and hygiene products have skyrocketed in recent weeks as the number of coronavirus cases continues to climb.


Although retailers have increased supplies of masks, some consumers have begun stockpiling in case there is a serious shortage like at the start of the year. Demand is expected to rise further as wearing masks indoors became compulsory in Seoul starting Monday.

E-commerce operator Market Kurly announced Monday sales of masks soared 209 percent for the week from Aug. 15 through Aug. 21 compared to the previous week. Sales of disinfectants jumped 130 percent while health supplements rose 41 percent during the same period. Sales of mask cases, used for storing masks, also went up by 124 percent.

The government-approved KF (Korea Filter) masks are especially popular. Sales of KF94 masks skyrocketed 241 percent and KF80 masks increased 239 percent — much higher than the 65 percent rise of the more breathable KF-AD (Korea Filter Anti-Droplet) masks that were particularly well-received when the weather started to get warmer.

Masks and related products became popular again starting in the third week of August, when the daily new infections started to spike due to a cluster linked to a church and an Aug. 15 rally in Seoul.

“I have a total of 1,500 masks, but I still feel like they aren’t enough,” wrote one commenter on a Naver community website on Friday. “I’m saving masks in case there’s a shortage. I know I’ve bought enough, but I just feel like I need to buy more.”

One commenter responded, “I recently ordered dental masks, but the seller canceled the order after Covid-19 became more serious.”

TMON also said Monday its mask sales jumped up eightfold, while sales of hand sanitizer skyrocketed 12-fold during the same period as Homeplus.

Amid concerns over the growing number of cases, demand for health supplements has also risen this year.

Market Kurly said sales of vitamins and red ginseng increased 118 percent and 154 percent respectively in the first half of the year compared to the same period last year. Propolis and lactic acid bacteria that are taken to strengthen the immune system were particularly popular, according to the company.