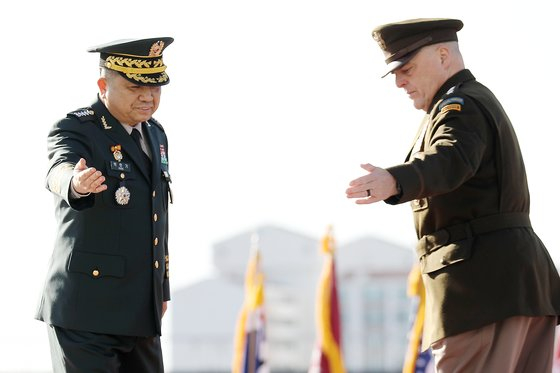 
The United States has increased the number of criteria to be assessed for the transfer of wartime operational control (Opcon) to South Korea, according to military sources in Seoul.

Multiple sources attested Monday the number of items on the core Mission Essential Task List (METL), which is used to assess and verify the combat capabilities of allied forces, increased from 90 to 155, effectively raising the bar for Seoul to recover operational control within President Moon Jae-in’s term, which ends in 2022.

“Among the items added to the list are several that are not easy to achieve, meaning there could be hurdles to the timetable on Opcon transfer in the future,” said one source.

The bulking up of the criteria was apparently made on the request of U.S. Forces Korea (USFK) Commander Gen. Robert Abrams, sources said. The revised list was submitted to the Blue House in May.

The recovery of operational control has been a key goal of successive presidential administrations in Seoul, as it would allow a South Korean four-star general to command allied forces on its soil in the event of a war on the peninsula. Since the 1950-53 Korean War, that power has been in the hands of the USFK commander.

Last August, the allies verified a total of 90 items on a checklist to test South Korea’s IOC. This year’s planned assessment for FOC, the next step in the process, will require verification of the same criteria plus 65 more, totaling 155 items. Then, full mission capability will be evaluated sometime later.

The strengthened criteria adds a major impediment to Seoul’s Opcon plan, which had already been delayed significantly after the FOC assessment was taken off the agenda for this month’s combined military exercises owing to U.S. reluctance to push forward a large-scale drill amid the ongoing Covid-19 pandemic.

While some in Seoul’s military welcomed the decision as a chance to ensure the Opcon transfer isn’t rushed to meet a political timetable, others are expressing concern at what they construe to be a sign of Washington not wanting to relinquish Opcon to Seoul.

Kim Jeong-seop, a leading researcher at the Sejong Institute, in an op-ed on Thursday, criticized the United States for insisting on outdated and overly stringent criteria on the Opcon transfer.

A former Deputy Minister for Planning and Coordination at the Ministry of National Defense until last June, Kim said the criteria for the Opcon transfer should mainly focus on South Korean commanders’ capacity to lead allied forces through a joint command structure rather than the Korean military’s combat abilities themselves.

“The current Opcon transfer assessment method is vulnerable to external factors like the Covid-19 crisis as well as the United States’ [shifting] position on the matter,” Kim wrote.

According to one high-ranking military officer in Seoul, fears are pervasive that the United States will use South Korea’s failure to meet any of the criteria listed as an excuse to delay the Opcon transfer.

“The Blue House too is keeping a close watch on U.S. movements on Opcon after its recent national security team reshuffle,” the source said.

Summertime military drills between Korea, U.S., are a go