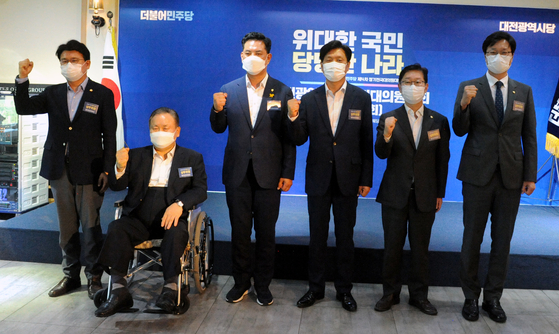 
Six lawmakers from the ruling Democratic Party (DP) started self-isolation on Monday after coming into contact with an infected person at a party event in Daejeon last week.

They all attended a meeting of delegates in Daejeon on Aug. 18. A reporter for an internet news outlet who covered the event tested positive for the coronavirus on Sunday.

The reporter started showing symptoms on Aug. 16. But she reportedly continued working and visited many public offices in the following days. She took the test on Sunday and was confirmed as a patient later that night.

After attending the event in Daejeon on Aug. 18, the six lawmakers returned to Seoul and actively participated in party meetings and National Assembly events before Daejeon municipal officials notified them of the confirmed infection on Monday.

“I came to the National Assembly [in Yeouido, western Seoul] this morning, but I was told to take the test,” Rep. Park told Newsis. “I took the test at the Yeongdeungpo Public Health Center. I and other participants of the event will all take tests.”

The National Assembly on Monday preemptively elevated its social distancing protocol for two weeks in order to save the legislature from the latest resurgence of coronavirus infections.

“The National Assembly already implemented preventive measures as strong as Level 3 social distancing guidelines, [but] a daily average of 1,000 outside guests are still visiting the legislature buildings,” National Assembly Speaker Park Byeong-seug was quoted as saying by his spokesman, Han Min-soo. “Because there are still blind spots, we need to upgrade our protocols.”

During this period, conference rooms inside the Members’ Office Building and the National Assembly Library will be shut down.

Visitors’ passes will not be issued during the two-week period and journalists not accredited with the legislature will be temporarily barred from entering the compound. The number of participants per press conference will also be limited.

“The National Assembly employees and lawmakers’ aides will be asked to work from home or commute outside rush hours,” said Han. “Cafeterias will have three rotation times to reduce the number of people dining at the same time.”

Meanwhile, the National Human Rights Commission said its head, Choi Young-ae, took the coronavirus test on Monday after reporting a high fever. The test results will be available Tuesday.