Sindorim Station is filled with commuters wearing face masks during the morning rush hour on Monday. The Seoul Metropolitan Government issued an administrative order requiring that face masks be worn in both indoor and outdoor public spaces. [YONHAP]


More than half of Koreans believe the government must ratchet up its social distancing regulations to curb the recent surge in coronavirus cases, according to a new poll published Monday.


Realmeter’s poll, commissioned by YTN, found that 55.9 percent of respondents said it is necessary to escalate the current Level 2 social distancing guidelines to Level 3 in order to contain the situation as soon as possible.


Another 40.1 percent said the decision to escalate the social distancing level must be made prudently, taking into account impacts to the economy. 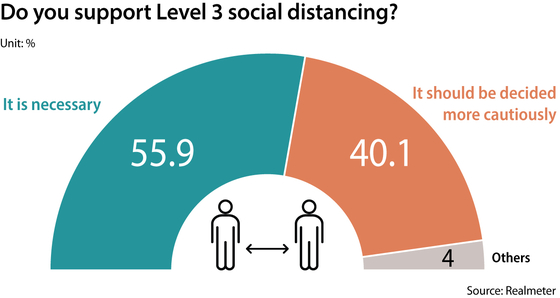 The poll was conducted Aug. 21 and surveyed 5,706 adults. The confidence level was 95 percent and the margin of error was plus or minus 4.4 percentage points.


Schools and kindergartens would be completely shut down under Level 3 measures. Companies would be advised to order most of their workers to work from home, except for the essential few required to operate the businesses on-site.


From Aug. 10 through Sunday, 2,625 new community-related cases were reported, an average of 187.5 new daily infections. The number is high enough to meet the government standards to raise the social distancing level.


Realmeter’s survey found that 53.9 percent of respondents said elevating the social distancing level is necessary in Seoul, where the Aug. 15 rally protesting the Moon Jae-in administration took place. Public health authorities said the massive protest, participated in by as many as 20,000 people from across the nation, was one of the main sources of the virus outbreak’s abrupt acceleration.


According to the poll, 48.7 percent said the social distancing level should be increased in Gyeonggi and Incheon areas.


In a separate poll conducted by Realmeter, approval ratings for President Moon and his ruling Democratic Party (DP) increased last week. The approval rating of the main opposition United Future Party (UFP), which had overtaken that of the DP in a previous poll, dropped.


The poll had a confidence level of 95 percent and margin of error was plus or minus 2 percentage points.


In the two previous polls — results of which were announced on Aug. 13 and 17 — the UFP’s approval rating had overtaken that of the DP for the first time since the 2016 political scandal that led to President Park Geun-hye’s removal from office.


“The public expectations for the government and the ruling party to execute preventive measures to stop the outbreaks affected the increases in approval ratings of Moon and the DP,” the survey's authors wrote. “Their supporters also united to back the president and the DP as the UFP overtook the ruling party.”


Realmeter said the Aug. 15 rally, organized by the conservatives, effectively stalled the upward trend of the UFP’s approval rating.


Despite the UFP’s stance that it has never endorsed the rally, the DP has said the opposition party condoned the anti-government protest and fueled the resurgence of nationwide infections.


More information about the two surveys is available on the websites of Realmeter and the National Election Survey Deliberation Commission.