President Moon Jae-in urged the public to comply with the central government’s Level 2 social distancing system Monday, warning that the final Level 3 could be enforced if Covid-19 cases don’t go down.

His warning came during a meeting with senior secretaries at the Blue House as Korea counted 266 new cases of the coronavirus on Sunday.

The Korea Centers for Disease Control and Prevention (KCDC) announced Monday morning that 258 local infections and eight imported cases were detected throughout the nation Sunday, conspicuously lower than Saturday’s combined figure of 397. Every major city and province saw at least one new Covid-19 case Sunday except Daegu and Jeju Island.

Health authorities warned the drop in daily cases didn’t mean the outbreak was ebbing, saying figures for Sundays are normally lower than other days because fewer people get tested over the weekends.

Korea’s central government raised the social distancing level for the entire nation from Level 1 to Level 2 on Sunday, a week after Seoul, Incheon and Gyeonggi saw their levels elevated.

Level 3 normally comes with harsher measures. Under a set of guidelines revealed earlier this year, any congregation of 10 people or more will be banned, schools will close and sports games will be canceled.

Health authorities so far have only said they were monitoring the situation to see whether Level 3 was necessary, while the Korean Society of Infectious Diseases said Monday in a statement that it was time for Level 3.

Of the eight imported cases, three were from Russia, two from Ukraine and one each from Bangladesh, India and the United States.

By Saturday at midnight, Korea had counted 17,665 coronavirus patients in all, the 75th highest in the world. 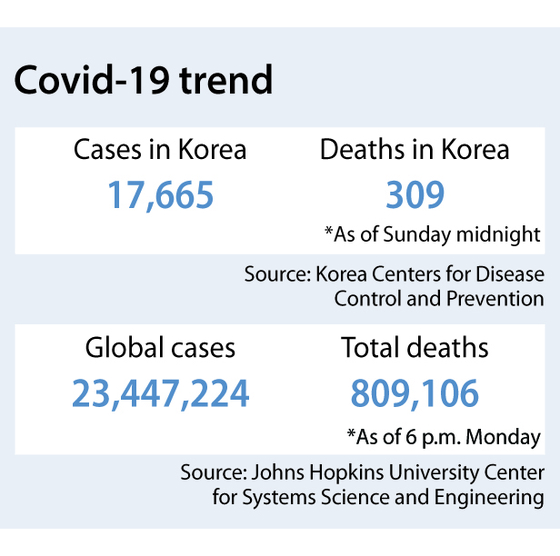 A cluster emanating from the politically controversial Presbyterian Sarang Jeil Church in Seongbuk District, central Seoul, reached 875 cases as of Monday noon, according to the KCDC, up 34 from a day earlier. Of that figure, 822 people were identified as living in the greater Seoul area encompassing Seoul, Incheon and Gyeonggi.

Another cluster at Woori Jeil Church, a Presbyterian church in Yongin, Gyeonggi, which has no known links to the Sarang Jeil Church, hit 182 cases, two more than the previous day.

The Yoido Full Gospel Church in Yeouido, western Seoul, added six more cases to reach 41, 25 of whom were identified as church members. The rest are their relatives and acquaintances.

The hot spot from the anti-Moon Jae-in rally on Aug. 15 in Gwanghwamun, central Seoul, rose to 176 cases, 40 more than on Sunday noon, all of whom are not members of the Sarang Jeil Church and presumably got infected while protesting on the streets or had contact with a protester. Forty-five of those people live in Seoul, while the rest live in other parts of the country.

Health officials believe congregants of the Sarang Jeil Church spread the virus during the rally, as numerous church members had participated that day even as a cluster was growing in their church community, disobeying orders from the government to self-quarantine.

The Seoul Metropolitan Government last week mandated everyone who participated in the Aug. 15 rally in Gwanghwamun to get tested for the coronavirus, warning they could face 3 million won ($2,500) in fines and additional charges if they didn’t.

On Monday, the Seoul city government said it would expand the order to include every civic group that joined a rally in the capital that day, Korea’s Liberation Day, saying they all have up until Wednesday to show up at a Covid-19 testing site.

Seoul warned that in the case they test positive for the virus after the deadline, they could be forced to pay for their entire Covid-19 treatment and additional charges, which are currently covered by the state. Seoul officials stressed that all testing fees for protesters will be free of charge, and if they wish, they can go through anonymous testing by submitting their phone numbers rather than their names.

This means some 2,000 people from the Korean Confederation of Trade Unions (KCTU), who rallied near Jonggak Station in Jongno District, central Seoul, near Gwanghwamun, will have to undergo mandatory testing.

The KCTU said Monday that a 49-year-old union member who joined the Aug. 15 protest received a positive test result last Saturday, though it wasn’t sure whether he was infected at the rally. The union identified the member as working for a Kia Motors factory in Hwaseong, Gyeonggi, and said some 20 other people who rallied near him that day have all tested negative.

The KCTU was among a handful of groups who had asked the Seoul Administrative Court earlier this month to invalidate the Seoul Metropolitan Government’s ban on any rallies on Aug. 15, as the Sarang Jeil Church cluster was burgeoning. The court upheld the Seoul government’s ban for most protests, including that of the KCTU, but allowed two protests to go ahead as planned in Gwanghwamun, including the one joined by numerous congregants of the Sarang Jeil Church.

To circumvent the law, the KCTU claimed it would hold a “press conference” instead, which, by law, doesn’t have to be reported to local authorities. All rallies are supposed to be reported to police at least 48 hours in advance of the congregation. But the Aug. 15 KCTU press conference had all the hallmarks of a political rally, with members chanting antigovernment slogans and singing in unison.

The Seoul government also said Monday that 17 churches in Seoul were found to have held in-person services with 20 people or more Sunday when civil servants combed the capital to check whether they were adhering to orders from the central government.

The central government last week banned all in-person activities for churches in Seoul, Incheon and Gyeonggi until Aug. 30, only allowing a few people to be in a church to produce online services for worshippers to watch from home.

Seoul officials said Monday that 214 churches that held in-person services with fewer than 20 people were given warnings on the spot and ordered to disperse, while 17 churches where 20 or more people were gathered have been slapped with a congregation ban, which means they have to shut down for two weeks and can’t even stream online services.

Seoul officials warned that other businesses and institutions categorized under the “public use facilities” in the nationwide Level 2 social distancing system will also be forced to close for two weeks if they fail to abide by rigorous sanitation guidelines.

Under the central government’s social distancing Level 2, these places have to keep tables away from each other by at least 1 meter, manage a digital log of all visitors, and limit the number of customers at all times by receiving one person for each four square meters of its business.

Separately from the social distancing system, the Seoul government said everyone in Seoul will have to wear face masks at all times in public from now on, except in “inevitable” cases like when they’re eating in restaurants. People must also wear face masks outdoors when they’re around others, the office said, including parks.

Violators can face penalties worth 100,000 won starting from Oct. 13, when the grace period ends.