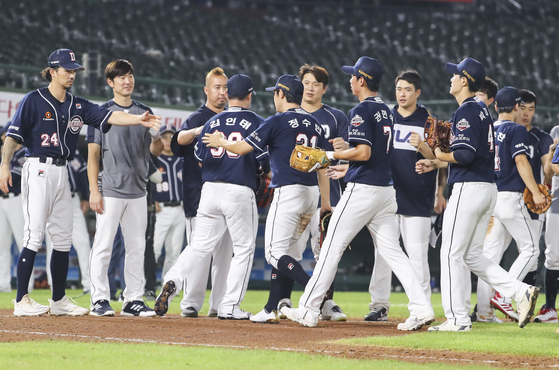 The Doosan Bears players celebrate after picking up a win against the Lotte Giants. [YONHAP]


The Doosan Bears are back.

Just a week ago, things weren't looking good for the Seoul team. After a difficult couple of weeks, the Bears had slipped down to fourth in the regular season standing, behind local rivals the LG Twins.

One week later, the Bears are still in fourth place as of Monday 6 p.m., but with four wins and two losses over the last six games they're sitting just half a point behind the Twins.

Over the weekend the Bears became the only team to pick up three wins, putting the team on a three-game winning streak.

Unusually, the three wins weren't against the same club — the KBO started a period of two-game series last week and the Bears picked up a clutch 1-0 win on Friday against the Lotte Giants at Jamsil Baseball Stadium in southern Seoul before sweeping the SK Wyverns at Munhak Baseball Stadium in Incheon over the weekend with a series of 8-1 victories. 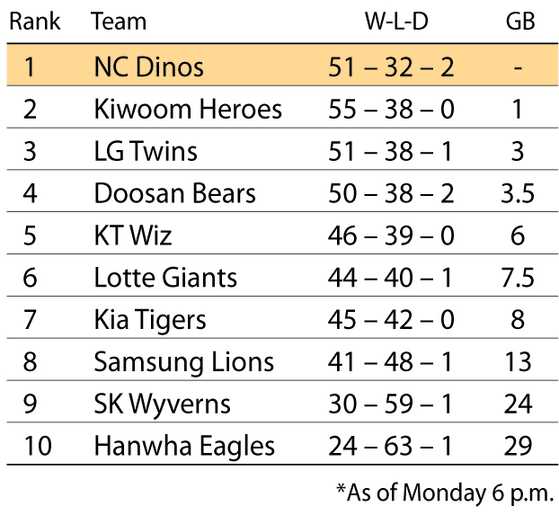 The Giants took the next two games — 7-3 in Busan on Wednesday and 6-5 in Seoul on Thursday.

Friday's 1-0 win for the Bears, the two clubs' fourth game in a row, came right down to the wire, with the score holding at 0-0 until the very last inning. Doosan loaded the bases at the bottom of the ninth and catcher Choi Yong-je stepped up to hit a walk-off run with only the 10th hit of his career.

This season the Bears have been struggling with their pitchers as the usual faces have been missing from the entry due to injuries. But they finally seem to have found a way to overcome that weakness on the mound.

Behind the plate, Choi has been filling in for regular catcher Park Sei-hyok. Although Choi joined the Bears in 2016, he's not a well-known figure in the KBO, as he only appeared in four games back in 2016 and didn't reappear until this season.

With Yang Eui-ji, now of the NC Dinos, behind the plate until 2018 and Park Sei-hyok stepping up after Yang left, there was no room for second-tier catchers like Choi. This year he finally earned his shot, and after 14 games played, Choi has a 0.300 batting average with six RBIs and nine hits.

On the mound, the Bears don’t have last year’s big arms, but they have filled those holes with some new faces.

Hong Geon-hui, who was traded from the Kia Tigers, Choi Won-joon and Yoon Myung-june have all been given more opportunities on the mound.

In the starting rotation, foreign pitcher Raul Alcantara has successfully stepped into 2019 MVP Josh Lindblom's shoes. Alcantara joined the Bears after playing for the Wiz last year, and this season, he’s picked up 10 wins and a loss with a 2.89 ERA for the Bears.

In defense, infielder Lee Yu-chan has been fulfilling Heo Kyoung-min’s absence. Along with his defensive skills, Lee also showed his speed as he is ranked second in stolen bases at six for the month of August.

While the Bears’ bullpen is trying to cover the absence of their injured players, in the batting lineup, Jose Fernandez is having another strong season. Having played in all 90 games for the Bears, Fernandez currently leads the league in batting average at 0.361. Along with the batting average, he also leads the league in hits, at 132, as of Monday 6 p.m., three more than Lee Jung-hoo of the Kiwoom Heroes.

This is Fernandez’s second season in the KBO, and he hasn't missed a single game since joining the Bears at the start of 2019. During the Bears’ most recent game against the Wyverns on Sunday, Fernandez had another strong game adding four RBIs, which included two home runs.

Along with Fernandez, Bears’ center fielder Jung Soo-bin is slowly making his comeback at bats as he is ranked second in the monthly batting average at 0.400. Jung is also tied for first in hits at 30 for this month.

Starting Tuesday at 6:30 p.m., the Bears will continue their season by hosting the Tigers at Jamsil Baseball Stadium.

Elsewhere, the Giants had a great weekend as they swept their two-game series against the Samsung Lions. This month, the Giants are on a strong streak as they’ve picked up 11 wins, five losses and a draw. With that streak, the Giants managed to switch spots with the Tigers and are now ranked sixth in the league.

Thanks to the Giants' strong performance, infielder Dixon Machado is leading the KBO’s All-Star voting for a second straight week. The infielder has impressed the KBO with his defense and batting. Along with Machado, a number of Giants players like starting pitcher Dan Straily, outfielder Son Ah-seop and closer Kim Won-jung have been leading the voting in their positions.

Due to the delay to the start of the season, only the All-Star vote will be held — not the actual game.

The Giants will play their two-game series this week against the ninth-ranked SK Wyverns at Sajik Baseball Stadium.

The Twins will be heading over to Daegu following their Monday game in Jamsil to play a two-game series against the Samsung Lions while the NC Dinos will host the Hanwha Eagles in Changwon, South Gyeongsang.

The Kiwoom Heroes will head over to Suwon, Gyeonggi, for their two-game series against the KT Wiz.