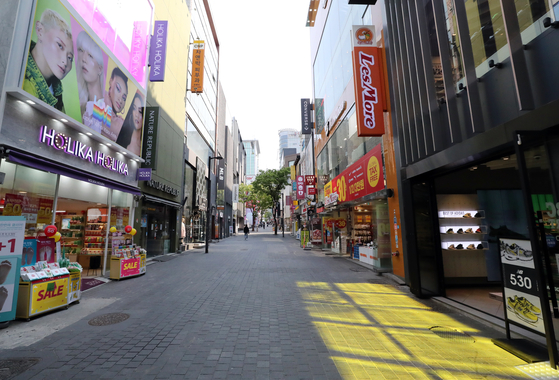 Korea's Composite Consumer Sentiment Index recorded a fourth consecutive month of increase in August, but it is yet to reflect the second spike in coronavirus cases. [YONHAP]

Korea’s consumer sentiment survey showed a fourth consecutive month of increase in August, suggesting that hopes of economic recovery are on the rise.

At least it seems that way looking at the numbers, recorded in the days just before the number of Covid-19 cases jumped up and the government rolled out new social distancing measures.

The survey, which was conducted between Aug. 10 and 14, did not reflect the recent spike of coronavirus infections which started to pick up after Aug. 15 when social distancing was raised to Level Two in the greater Seoul area, before being expanded nationwide a week later.

August’s Composite Consumer Sentiment Index (CCSI) recorded 88.2, four points up from the previous month, according to Bank of Korea (BOK) data on Tuesday.

The CCSI acts as a barometer of how optimistic consumers feel about the country’s economy. If the index goes under 100, it means consumers are pessimistic about the performance of the economy, while a figure above 100 means that consumers feel optimistic.

After recording 104.2 in January, the CCSI began to decline rapidly, recording 96.9 in February and then dipping to as low as 78.4 when coronavirus cases peaked in Korea.

In April, the index hit 70.8, then shifted to an upturn since May.

“With the OECD revising up Korea’s economic prospects, sentiment on the country’s performance was optimistic as shown in the CCSI,” said Hwang Hee-jin, head of the bank's economic survey team.

“The timeline of the latest survey, however, did not reflect the effect of the second wave of coronavirus infections, so it would be hard to estimate the index figure for September.”

The OECD recently fixed its outlook on Korea’s economic growth for this year from minus 1.2 percent to minus 0.8 percent. It was the highest level among 37 member countries of the OECD.

Meanwhile, the BOK is expected to lower the growth outlook for this year from the minus 0.2 percent projected in May to a minus 1 percent range at a monetary policy meeting scheduled for Thursday.

BOK Gov. Lee Ju-yeol on Monday said that the previous outlook would have to be “significantly lowered” during a report made to the National Assembly.

“We cannot rule out the possibility that the outlook would be lowered to as low as the minus 1 percent level,” Lee said, citing the prolonged Covid-19 pandemic and slower-than-expected recovery in the country's labor market.