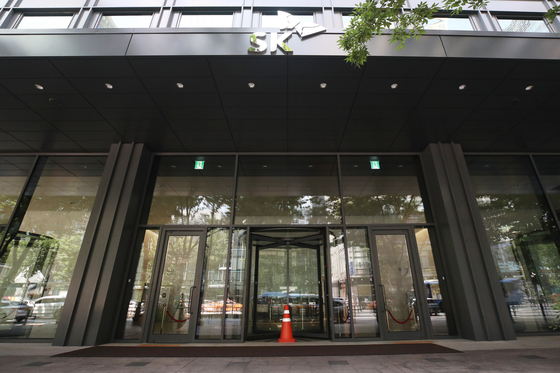 The headquarters of SK Group in central Seoul is closed on Tuesday after a worker was infected. [YONHAP]


A surge in coronavirus infections in the Seoul metropolitan area has shut major corporate headquarters, triggering fears of a ripple effect.

The headquarters of SK Group and the National Agricultural Cooperative Federation, both in central Seoul, were shut down on Tuesday after workers were confirmed infected.

An SK Innovation employee who works at the Gwanghwamun headquarters tested positive for the coronavirus late Monday, according to the group.

Since the group has instituted work-from-home policies across affiliates, the number of people in close contact with the infected employee might not be large, the group said.

When the headquarters will reopen has yet to be decided.

The head office of the National Agricultural Cooperative Federation, an umbrella organization of agricultural cooperatives nationwide, was temporally closed the same day following a confirmed infection at the building, which is located in Chungjeongno, Jung District, central Seoul.

GS Engineering & Construction reported one of its workers tested positive on Monday and shut its headquarters in Jongno District, central Seoul.

The closure will last until Wednesday.

The central Seoul area near City Hall and Gwanghwamun is one of the busiest business districts, housing the headquarters of major conglomerates like Hanwha and KT and banks including Hana Bank and Woori Bank.

But it is not the only part of the metropolitan area seeing corporate buildings close.

Samsung Electronics reported the second case of coronavirus at its Giheung Campus in Yongin, Gyeonggi, on Tuesday, and closed down the building where the infected worker worked.

That followed an infection of another office in the same building last Friday.

It remains unclear whether the second employee contracted the virus from the first.

Nearby, a researcher at GC Pharma in Yongin was confirmed infected on Monday, which led into a shut down of its headquarters on Tuesday.

All workers were sent home Tuesday.

The drug maker said that the infected worker contracted the virus while working from home.

Some Korean companies are feeling the impact of the coronavirus far from Korea.

LG Electronics has suspended operation of a television plant in Cibitung, Indonesia, after 200 workers were found to have been infected with the coronavirus.

That number is one-third of the entire workforce and a timetable for resumption of operations has not been decided.