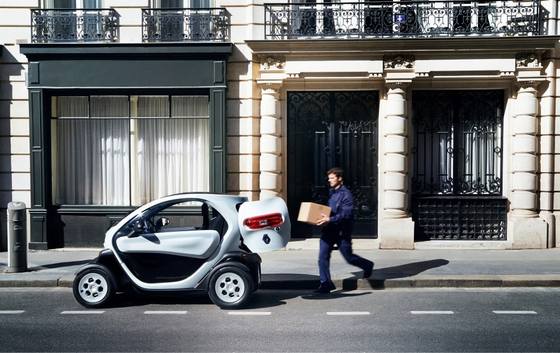 Thanks to its compact size, mobility and self-containment potential, Twizy is garnering particular attention during this pandemic-riddled era.

In 2015, Renault Samsung Motors collaborated with fried chicken franchise BBQ, asserting its capability as a substitute for traditional delivery scooters.

The Korea Housing Finance Corporation also welcomed Twizy with open arms when Renault Samsung Motors supplied 17 of them back in April to assist with public welfare services within the intricate city lines of Busan thanks to its agile maneuverability.

Given its compact size and mobility, it is no wonder why tourism is the place where it can shine the brightest. In France and Italy and on Korea’s own Udo Island, car-sharing of Twizy for sightseeing purposes is already taking place.

According to a survey of 1,600 Twizy buyers conducted by Renault Samsung Motors, 62 percent answered that Twizy’s short-drive practicality was the reason for their purchase, while 73 percent said that attribute would be the reason they would recommend Twizy to their acquaintances.

Twizy’s standout design was the reason of purchase for 47 percent of the buyers. Thirty-three percent said they would recommend the car for its design, and 14 percent said they were using Twizy for its notable outlook as a mean of advertisement.

A maximum speed of 80 kilometers per hour and a back seat which can be turned into a 180-liter or 75-kilogram trunk make Twizy ideal for short commutes or shopping trips.

Safety coming from its hermetic cabin, airbags, 4-point safety belts and four wheels make Twizy tantamount to, if not a better alternative to two-wheeled-vehicles. Twenty-seven percent of buyers answered that its stability was the main reason for purchase. Twenty-six percent of buyers said they would recommend it to others for its safety.

Since last October, Dongshinmotech from Busan is the sole manufacturer of Twizy, taking care of its world-wide demand quota, thanks to Busan Metropolitan government’s provision of financial and administrative assistance.

Renault Samsung Motors is offering a 200,000 won discount on cash purchases and a 1.9 percent low interest installment plan over 60 months.