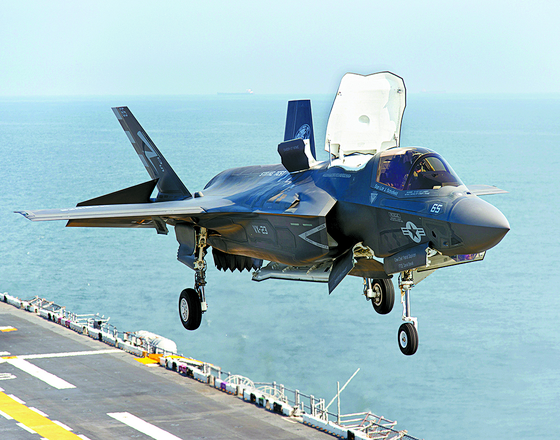 An F-35B jet lands vertically on the USS Wasp carrier in 2013. Korea plans to acquire 20 of these jets to operate on its planned light aircraft carrier from the 2030s. [YONHAP]


Korea will double the number of F-35 stealth fighter jets it will buy from the United States, including variants that will operate on the country’s first aircraft carrier, according to military sources.

A total of 40 Lockheed Martin-built F-35 jets will be acquired at a cost of approximately 8 trillion won ($6.7 billion), the sources said.

Priority will be given to the acquisition of 20 F-35B jets, which are capable of short takeoff and vertical landing, and are due to be deployed on a light aircraft carrier Korea plans to complete by the early 2030s.

An additional 20 F-35A jets — the conventional takeoff and landing variants – will be acquired afterwards, which will raise the total number of fifth-generation fighters in Korea’s air fleet to 80. In 2014, the country signed a $6.4 billion deal with the United States to acquire 40 F-35As as part of the first phase of its air force augmentation plan.

Military sources added the additional acquisitions of F-35 aircraft, constituting the second phase of its fighter jet project, will be formally ratified at a Joint Chiefs of Staff meeting slated for October.

“The second phase of the fighter jet project had initially been planned for 20 units, but this has been doubled to coordinate with the construction of a light aircraft carrier,” a source said, adding that the timetable to purchase the F-35B variants was pushed forward.

In its national defense plan for 2021 to 2025 unveiled earlier this month, Korea announced for the first time it was planning to build a 30,000-ton level aircraft carrier that will operate fighter jets capable of vertical takeoff and landing.

The decision to expedite the purchase of the F-35B planes — the only planes in production around the world that are capable of vertical takeoff and landing — was reached to allow planners to design the aircraft carrier in line with the aircraft's specifications.

A U.S. Navy America-class aircraft carrier, capable of vertical landing and take off operations. Korea plans to build its own light carrier with a similar displacement by the early 2030s. [U.S. Navy]


To suit the Navy’s plan to complete the vessel sometime around 2030, a concept design needs to be drawn up by the end of this year, before work on basic design begins next year.

“We require knowledge of the precise specifications of the F-35B jet to design the deck and main parts [of the carrier],” said a military source. “But Lockheed Martin is of the position it cannot release information on the jet until a contract is signed for its purchase.”

A feasibility study on the acquisition plan is set to be completed by the first half of next year, with military planners believing the purchase will go through in the middle part of the decade if a contract is signed between 2021 and 2022.

Though the new F-35B planes are set to be deployed on an aircraft carrier, they will be operated by the Korean Air Force rather than the Navy, sources said.

So far Korea has received the delivery of 16 F-35A jets it ordered in 2014, but plans to obtain all 40 by the end of next year, which will then mark the launch of the second phase of its acquisition plan.