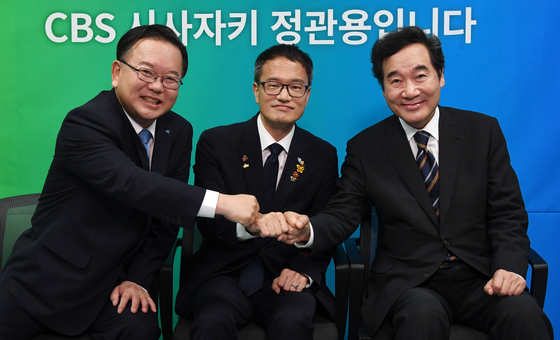 Candidates for chairman of the Democratic Party (DP) attend a debate hosted by CBS on Aug. 18. From left, Kim Boo-kyum, Park Ju-min and Lee Nak-yon. [YONHAP]


Candidates for the ruling party’s chairmanship race are pushing for a second round of emergency relief grants to combat the economic effects of the coronavirus, despite objections by the financial minister.

The Democratic Party (DP) will hold its national convention on Saturday to elect the members of its Supreme Council, including a new chairman. Three high-profile politicians — Reps. Lee Nak-yon and Park Ju-min and former Interior Minister Kim Boo-kyum — are competing in the chairmanship race, and eight candidates are running to fill five seats on the Supreme Council.

“The second round of emergency relief grants should be given to all the people,” Park said in a statement released Tuesday. “Not just the low-income class is suffering from hardships caused by the outbreak. It is pragmatic to pay the grants to everyone.”

Park said the grants should be given before the Chuseok holiday, which falls on Oct. 1 this year.

Kim also said the government must pay another round of relief money to everyone.

“It is extremely difficult to draw a fair line [between those who are eligible and who are not],” he said in an interview with CBS on Tuesday. “For now, the government should give the second round of relief funds to all, and then redeem the money from high-income earners when they file annual tax reports.”

Lee agreed that a second round of relief funds is necessary, but not all people should be eligible for it.

In a statement released on Monday, Lee said the government should give the second round of relief to those who are in need. The former prime minister also urged the party and the government to suspend their discussions on the program for the time being.

“Now is the time to overcome the outbreak,” Lee said. “This week will be the turning point of whether Korea will face Level 3 social distancing or not. We must stop any discussion on the emergency relief payment this week and concentrate all attention on preventive measures.”

Rep. Kim Tae-nyeon, floor leader of the DP, tried to dissuade the party's top politicians from continuing to debate the issue.

"Now is not a time for the politicians to have a fierce debate about relief grants," he said during a party meeting. "It is time to direct all our efforts to stopping the spread of infections."

As political pressure builds for the government to pay another round of emergency relief grants, Finance Minister Hong Nam-ki on Monday expressed his concerns. He said issuing government bonds is “100 percent” inevitable if the government is to carry out a second round of payments.

In March, President Moon Jae-in announced a plan to provide government relief to 70 percent of the country’s households, part of an effort to boost domestic consumption in the wake of the coronavirus outbreak. On the eve of the April general elections, the DP urged the government to pay emergency coronavirus relief funds to all families, as public complaints snowballed. In April, the government spent more than 14 trillion won ($11.8 billion) to pay relief money to all households.

Hong also said Monday that even if the government doles out another round of payments, only low-income earners should be eligible for the program.

Despite the Finance Ministry’s concerns, another top DP politician, Gyeonggi Governor Lee Jae-myung, is also pushing for a relief-for-all system. In a Facebook message posted on Monday, Lee argued that excluding the higher-income earners would violate the constitutional principle of equality and create social divisions.

He also said that giving relief to some, but not all, falls short of the DP’s policy of a more universal welfare system, and more closely resembles a selective welfare program promoted by conservatives.

“We believe the money should go to the people who actually need it,” Rep. Joo Ho-young, floor leader for the UFP, said in an interview with KBS Radio. “Salaries of public servants and corporate workers have not decreased [due to the outbreaks]. If the government gives relief to everyone, the financial resources to back small business owners and those who are self-employed will inevitably be reduced.” 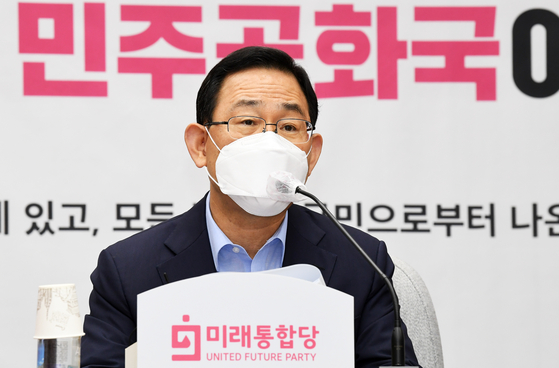 
Joo also attacked the DP for having failed to unify its opinions.

“They are in a leadership vacuum,” he said. “That’s why the ruling party is talking incoherently.”

“Those pushing for giveaways to all said the money will boost consumption and help the economy,” Yoon said in her Facebook message posted Tuesday. “It is unimaginable to distribute cash and boost the economy while the country is maintaining this high level of social distancing.”

She added that the government should spend money to rescue those who are desperately in need. 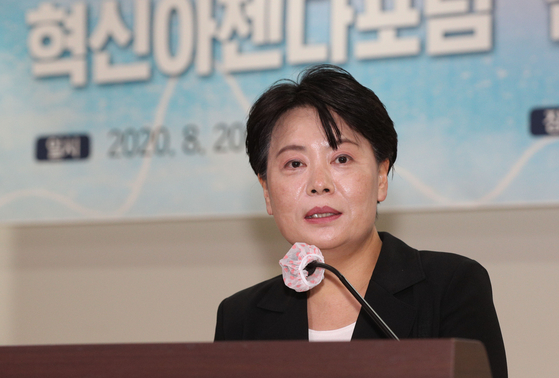 Rep. Yun Hee-suk of the UFP speaks at a forum, hosted by the party, on Thursday. [YONHAP]


“The people who are working from home, without worries of losing their jobs, won’t need relief funds,” Yoon wrote. “Those hit relatively less will have to give up a chance to spend the relief fund to buy hanwoo beef or a pair of new glasses and support truly needy neighbors[...]It will show how we can be in solidarity as a community. Politicians should bring out the goodness inside us.”