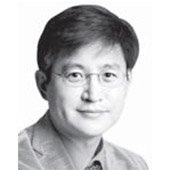 Lee Sang-ryeol
The author is chief editor of content production at the JoongAng llbo.

Even when taking into account the abnormality of the coronavirus pandemic, the Korean economy has gone too far astray. I can cite just a few examples. One is data from July jobs. The total number of employed fell by 277,000 in July compared to the same month last year. But 379,000 jobs were created for those 60 years or older, as the Moon Jae-in administration’s job budget mostly went to creating temporary jobs for seniors.

Secondly, household income data in the second quarter rose 4.8 percent in contrast to a year ago, whereas income earned from labor or business fell by 5.3 percent and 4.6 percent, respectively. That means household income was mostly sustained by the government’s relief handouts.

The third point has to do with the latest government measure to increase public housing supply. It proposed to raise the floor area ratio (FAR) for redevelopment sites under the condition that two state entities — Korea Land and Housing (LH) and Seoul Housing & Communities Corporation (SH) — participate in redevelopments so that extra spaces bring returns to the state.

Number four is the government fiscal account in which expenditure exceeds income. The fiscal deficit reached an all-time high of 110.5 trillion won ($93 billion) in the first half of the year alone.

The four examples have a common thread — an omnipotent government. The government took responsibility for creating jobs and ensuring family income and even homes for the people. Yet it does not care about snowballing debt. The government does not explain how it will cut or repay debt.

A government’s role in the economy has become mighty. Its fiscal role inevitably grew in the face of an unprecedented Covid-19 crisis. But even without the virus risk, the government’s spending contributed 1.6 percent of the 2 percent annual GDP growth last year, whereas the private sector contributed only 0.4 percent of the GDP.

The government is out to do everything itself. It vows to take responsibility for the well-being of everyone. Statism dominates its governing philosophy.

An outsized state role, however, can cause serious side effects. The steep increase in the minimum wage pushed thousands of low-skilled workers out of their jobs. The universal — and rigid — 52-hour work week only dampened industrial activity. The government’s half-baked housing supply measure also failed to convince the market, only fanning housing prices further. The government wrecked the market through excessive meddling in the labor and real estate sectors.

But the Moon administration has no intention of backing down. It is going further left. President Moon Jae-in even endorsed a plan to set up a state agency to keep watch on the real estate market. State control in pricing has become more frequent. When jeonse (long-term rent with lump-sum deposits) prices soared, the government regulated them. When landlords rushed to shift jeonse to monthly rents in reaction, the government imposed restriction on the ratio of converting jeonse to monthly rents. It adds one regulation on top of another to cause a vicious cycle of regulation. The government even advises tenants to file a lawsuit against landlords if they do not comply with the new rules set by the government. A normal government should mediate to lessen social conflict, not encourage it.

Outsized government influences can bring about a heavy toll on the economy. The private sector and market have lost vitality. Snowballing government spending should be covered with tax revenue. But people’s wallets have been getting thinner since the outbreak of the pandemic. As they have less to spend, the economy loses steam.

The coronavirus will reshape the future of individual countries. The Korean economy should be able to run on its own after the virus threat dies down. I wonder how confident the government is about the post-pandemic economy?

Statism stems from a lethal mix of ignorance about the market, the prejudice that the market only fattens the wealthy and the self-righteousness that the government knows best. The economy tends to turn over-dependent on the state under leftist governments. In the meantime, individualism and creativity vanishes. No doubt people’s lives will become harder as a result.