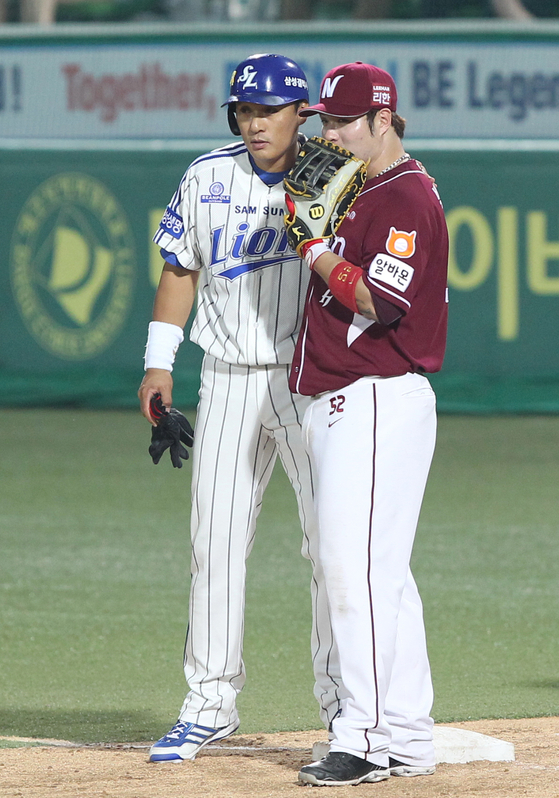 Fomer Samsung Lions slugger Lee Seung-yuop, left, and Park Byung-ho of the Kiwoom Heroes talk to each other during a KBO game back in June 24, 2014. [ILGAN SPORTS]


When legendary slugger Lee Seung-yuop, formerly of the Samsung Lions, retired, the Kiwoom Heroes’ Park Byung-ho was expected to step into the Lion King's shoes as the next big hitter in the KBO.

So far, Park seems to be living up to that legacy.


Continuing to keep up with Lee, this year, he tied another record, hitting 20 home runs or more for seven straight seasons. He became only the second player to do so in the KBO.

“Since my role is to hit home runs, I wasn’t paying much attention to hitting 20 home runs [or more] for consecutive seasons,” Park said. “I wasn’t thinking or being ambitious about it. But once I found out that the person who’s achieved the record ahead of me was Lee, I felt honored.”

Although Park seems to be following in Lee's footsteps, the two have distinctly different playing styles.

When hitting a home run, the batters need to have the right timing, bat speed and more. In terms of the physicality of the two sluggers, they may be the opposite.

Back when Lee was at his peak, he weighed less than the other sluggers. To overcome his light weight, Lee used bats that are heavier than the others.

During that time, Lee used bats that weighed about 930 grams to 960 grams (33 to 34 ounces), at the heaviest. Using his flexibility and centrifugal force, Lee easily hit the pitches over the fence.

While Lee used his flexibility, Park has been famous for his power since he was in high school. Park doesn’t use a bat that weighs over 900 grams, but he has enough strength to hit pitches over the fence. Weighing over 100 kilograms (220 pounds), Park uses a lighter bat so he can increase the swing speed.

Park himself also realizes the importance of power.

“To hit more home runs, you definitely need some strength,” Park said. “All the batters have the technical ability to hit more runs, but to hit home runs from difficult pitches like breaking balls, strength is definitely a factor.”

Still active in the KBO, Park may have tied a lot of Lee’s records, but he still isn't happy he lives up to the Lion King's legacy.

“I want to learn Lee’s smoothness [in his swing], but I can’t mimic that,” Park said. “I think you need to be born with such flexibility to make it possible. Just like Lee does, I also tried to hit accurately, in addition to hitting it hard. But trying to hit lighter while at two strike at bats wasn’t an easy skill to learn.”

Hitting lighter or being more accurate like Lee has always been a challenge but instead of trying to learn and be like Lee, Park focuses on his own strengths.

“I think my strength is that I can hit a home run anytime after two strikes while at bat,” Park said.

That being said, Park doesn’t really consider Lee a rival. Instead, Lee has been Park’s role model. Whenever Park’s name is being compared with Lee, Park says that “it’s a great honor but gives me some pressure.”

“[Lee’s advice] turned out to be great nourishment for my career,” Park said.

Park said that Lee’s advice allowed him to relax his shoulders at bat and think differently. Currently, Lee holds the record in the KBO for career home runs at 467. To get close to Lee’s record Park has a long way to go, as he is only at 306 as of Tuesday 6 p.m.

“I can’t even think about the record for career home runs,” Park said. “I just want to hit more than 20 home runs next season and be up there along with Lee.”

While Park’s home run record stands out in his personal statistics, for now, he cares more about the Heroes’ goal, which is to win the Korean Series.

Once again this season, Park has been suffering from minor injuries, but he tries not to take a long break to help the Heroes win the title.

“If I can’t get my batting average above 0.250, I feel unstable,” Park said. “I’m a player who doesn’t stand out when I don’t make any big hits. To help the team, I want to hit home runs consistently.”