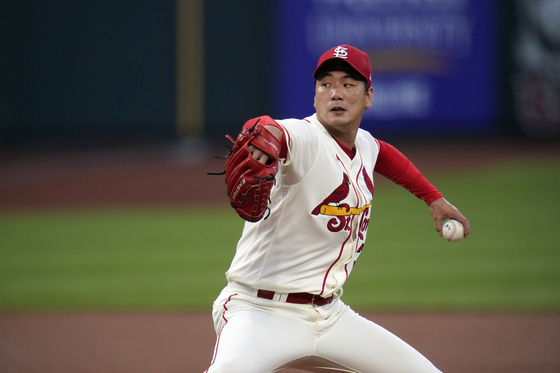 Kim Kwang-hyun of the St. Louis Cardinals throws a pitch during a game against the Cincinnati Reds at Busch Stadium in St. Louis on Saturday. [AP/YONHAP]


St. Louis Cardinals pitcher Kim Kwang-hyun was named as one of the top rookies in the MLB on Monday.

Kim, who joined the Cardinals this season, was one of 10 players highlighted on MLB.com’s “Pipeline MLB’s Hottest Rookies" for the fourth week of the delayed major league season.

Kim was added to the starting rotation earlier this month and picked up his first major league win over the weekend, throwing six scoreless innings to help the Cardinals pick up a 3-0 victory against the Cincinnati Reds on Saturday.

Earlier last week Kim had his first major league start against the Chicago Cubs, throwing three and two thirds of an inning and giving up one run.

The MLB.com article praised Kim’s start to the season, saying he “seems to have carved out a role in the Cardinals’ rotation moving forward.”