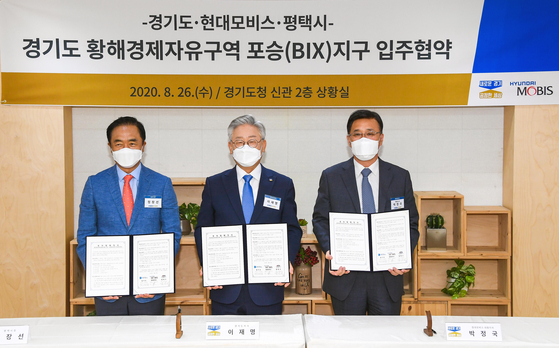 A total of 35.5 billion won ($29.9 million) will be injected into the production site, which will be located on 16,726 square meters (4.13 acres) of land in Pyeongtaek. Construction will start in September. The plan is to start producing electric vehicle (EV) components in the second half of 2021, Hyundai said.

The company plans to use the new factory to produce core EV components, including motors, inverters and power electronics modules. Referred to as PE modules for short, they are a combination of components that power EVs in the place of an engine.

To meet with a rapidly increasing demand for EV components, Hyundai Mobis plans to secure production capacity of 150,000 units next year and gradually expand facilities to reach a maximum of 300,000 units by 2026.

This will be the auto parts maker’s third factory specializing in eco-friendly vehicles.

The first was in Chungju, North Gyeongsang, which has produced components for hydrogen and electric vehicles since 2013. A plant in Ulsan, still under construction, will also focus on EV parts supply, but for Hyundai Motor’s models.

The 35.5-billion-won investment plan comes amid difficult and uncertain times for the auto industry as the coronavirus continues its spread around the world.

“The decision was part of our future strategy to prepare ahead of change in the industry. Pre-emptive investment was a must to succeed as the industry evolves to the era of electric vehicles,” Hyundai Mobis said in a Wednesday statement.

In the first half of this year, Hyundai spent 50 percent of its research and development budget.

“Hyundai Mobis’ performance in combustible vehicle components was slow compared to Tier-1 competitors,” Lee pointed out in a Wednesday report. “As the company has been focusing investment on future technology like autonomous or electric vehicles, our expectation is that Hyundai Mobis will become a Tier-1 player in those segments in 2021."