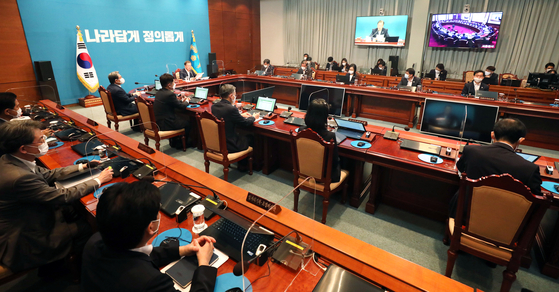 
While the Korean economy remains on red alert amid the coronavirus pandemic, the government is rushing to pass a set of bills aimed at tightening corporate governance regulations.

The government approved a revision to the Commercial Act and Fair Trade Act at a cabinet meeting held Tuesday, and plans to submit the bills to the National Assembly by the end of the month.

Business leaders have expressed concern that the ruling party, which controls a majority of the seats in the National Assembly, might unilaterally pass a series of bills to reform the chaebol — a legislative package that has been discussed since 2018.

The core of the legislation is the introduction of a multi-representative litigation system and allowing for the selection of outside auditors. The multi-representative litigation system allows shareholders of the parent company to file a compensation suit against an executive who causes damage to the subsidiary. For companies listed in the stock market, shareholders that have as little as 0.01 percent of the company’s shares would be able to file a lawsuit against the company’s executive.

“There is almost a zero percent chance for a small shareholder to pay all the expenses to hire a lawyer and file a lawsuit for something that will not bring anything in return,” said Choi Jun-seon, a professor at Sungkyunkwan University’s Law School.

"The system will highly likely be used by hedge funds with deep pockets as a way to threaten companies into giving them benefits."

And critics point out that the election of outside audit committee members included in the revision of the Commercial Act could violate the Constitution. This is because the law restricts the voting rights of shareholders — which is considered a type of property right — at the major shareholders' meeting.

Under the current law, auditors are selected from a list of executives appointed at the shareholders' meeting. If the revision is passed, auditors will be elected separately from the already-appointed list of executives. And the largest shareholder can only exercise 3 percent of his or her voting rights no matter how many shares the person holds.

The original goal of the revision was to guarantee the independence of auditors and give more rights to the smaller shareholders in the election process. However, some critics point out this could make the company vulnerable to attacks by speculative capital from abroad, which could amass shares and influence votes.

The revised Fair Trade Act also includes a line that strengthens the required equity ratio for holding companies, which some in the business community have denounced as a "poisonous clause."

Currently, an affiliate can be incorporated under a holding company that secures more than 20 percent ownership of a listed company, or 40 percent for an unlisted company. However, the revision would lift the requirements to 30 percent and 50 percent, respectively, increasing the cost needed to acquire companies.

“The law will only increase costs without any benefits, as it forces companies to buy more shares of companies within the same group,” said lawyer Lee Jun-kil, an advisor for the law firm Jipyong.

“Companies will waste all the money which should be used to increase jobs and invest in research and development, to pay for regulatory expenses."

The business community has also criticized a clause allowing the government to designate the type of information that can be exchanged between companies as poisonous. While the government says the provision would prevent collusion, companies argue that it prevents business synergy created by free communication.

“Companies will stop all exchange of information to reduce the slightest risk of possible problems, which will exacerbate the asymmetry of information in the market. Other countries only penalize when information exchanges later develop into price-fixing," said Lee.

The clause abolishing the Fair Trade Commission's (FTC) exclusive right to lodge fair trade complaints has also been criticized as burdensome. Under current law, prosecutors are only allowed to investigate cases suspected of violating fair trade laws, following a formal accusation from the FTC. However, the revision will allow the prosecution to make autonomous judgment over such cases, even in the absence of an FTC complaint. The business community has suggested this could cause a situation where the FTC and the prosecution investigate the same case.

“The government should consider giving a grace period to the revision, so that companies can voluntarily accept some of the regulations on their own,” said Lee Man-woo, an honorary professor at Korea University’s Business School.