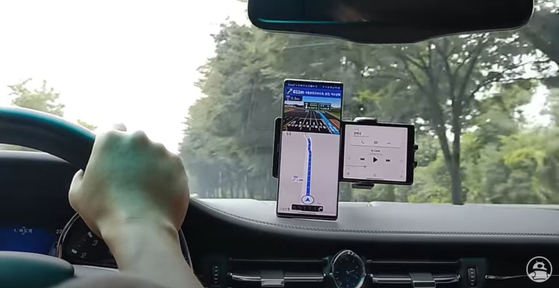 
A video that appears to show an unreleased LG Electronics smartphone with a small secondary screen that twists out from behind the main display was released by Android Authority, a well-known outlet for tips and leaks on Android devices.

The leaked footage is believed to show an LG Electronics project codenamed LG Wing. No information about the device has been released by the manufacturer, but rumors about the Wing have circulated in the media for months. The Android Authority footage is the first video of the device showing how it works.


The video shows the LG Wing opened in the shape of a lowercase T, with the back of the phone apparently rotated horizontally to reveal a smaller rectangular screen underneath, according to Android Authority.

A navigation app is being used on the main display, while the secondary screen at first shows a music application and later switches to a phone interface when the user receives a call.

Earlier reports guessed that the main display would be 6.8 inches while the smaller second screen would measure 4 inches with a 1:1 ratio.

The leaked footage does not show how the phone opens and closes, but it appears that the second screen twists out from behind the main display in a format similar to how the cover was flipped off on pre-smartphone clamshell devices like the Samsung S4300 and Motorola AURA.

With two screens stacked on top of each another, the handset is likely to be thicker than other phones.

LG does not confirm rumors or details of handsets before official announcements. According to media reports, the LG Wing is likely to be part of the company’s premium mobile lineup in the second half of 2020, with some speculating it will be unveiled next month.

While competitors like Samsung, Huawei and Motorola have been searching for ways to fold a single wider screen in the race for a new form factor, LG has stuck to the concept of “dual screen” phones, with two separate screens that can be used simultaneously.

Its previous two dual screen phones, the V50 ThinQ 5G and V60 ThinQ 5G, came with separate, attachable secondary screens. If the leaked footage is accurate, the LG Wing will be the company's first device with two built-in screens.