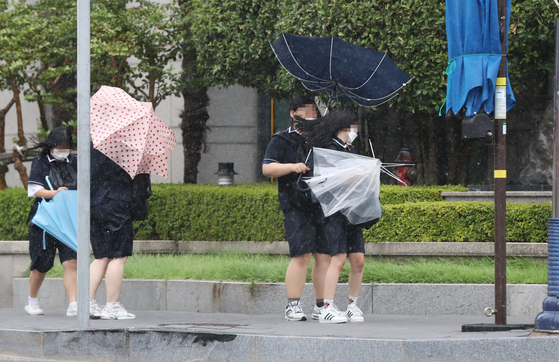 Students struggle with umbrellas in front of Mokpo Station in South Jeolla on Wednesday afternoon as Typhoon Bavi approached the peninsula. [YONHAP]


The Korea Meteorological Administration (KMA) warned the southern regions to brace for Typhoon Bavi Wednesday, which was already uprooting trees as it approached.

“The typhoon will bring Jeju Island, South Jeolla and southern regions of North Jeolla very strong winds of over 40 meters per second [89 miles per hour], with heavy rainfall of 10 to 30 millimeters [0.4 to 1.2 inches] per hour accompanied by thunderstorms,” KMA said in a statement released at 3:30 p.m. Wednesday. “Strong winds and heavy rain are expected to cause heavy damage in these regions into Thursday.”

The typhoon was located some 200 kilometers (124 miles) west of Jeju Island at 3 p.m. Wednesday, and continued to move northward with a maximum wind speed of 45 meters per second, strong enough to knock a person off their feet. The typhoon had a radius of maximum wind (RMW) of 320 kilometers, bringing most of South Jeolla and coasts of North Jeolla under its influence.

Its impact was felt immediately on Jeju Island Wednesday morning. As of noon, the island reported several uprooted trees, two detached store signs, broken store windows in Seogwipo and Jeju City and one crashed street light near the Jeju Airport. 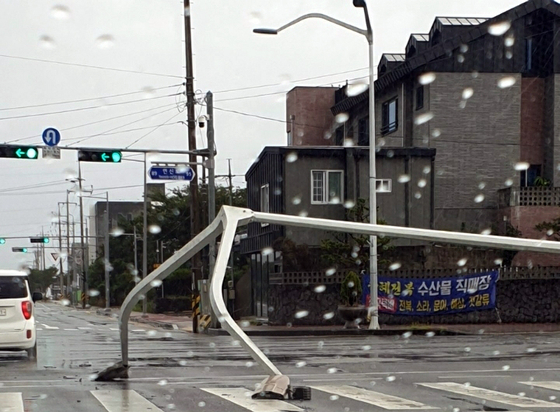 A street light in Ara-dong, Jeju City, is seen crashed onto the street in the wake of Typhoon Bavi, which passed close to Jeju Island on Wednesday afternoon. [YONHAP] 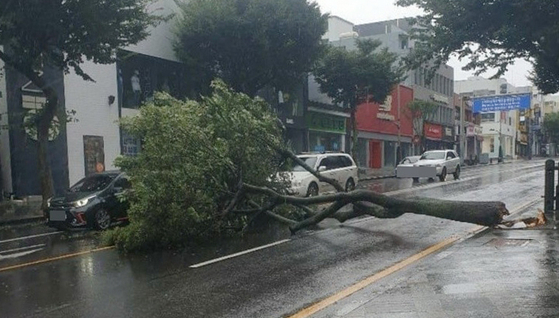 A tree was uprooted in Yeon-dong of Jeju City on Wednesday. [NEWS1]


All flights and ships in and out of Jeju were canceled through Wednesday afternoon.

The typhoon was forecast to move northward and pass west of Seoul between midnight and 6 a.m. Thursday, at which point it was expected to maintain a maximum wind speed between 40 to 43 meters per second. 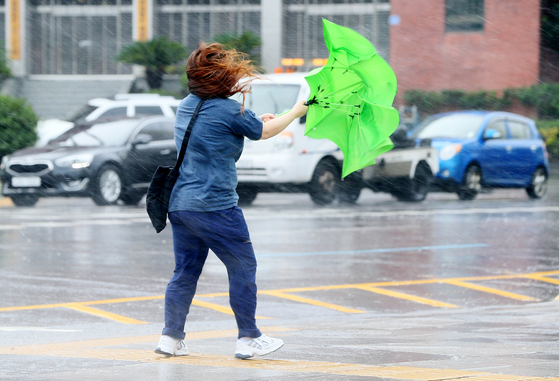 A woman in a street in Jeju on Wednesday morning struggles in the wind. [YONHAP]

Typhoon Bavi was forecast to pass beyond Seoul by noon Thursday, moving through North Korea and into China. The KMA estimated the typhoon will weaken into a tropical storm by 6 p.m. Thursday, at which point it would be located some 290 kilometers south of Harbin, China. 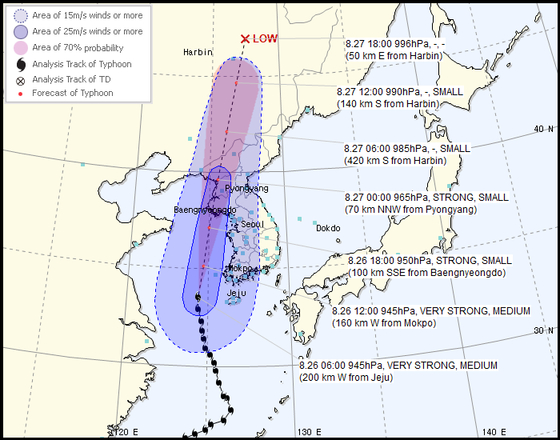 
Last year was a record year for Korea in terms of the number of typhoons it experienced. Korea was hit by seven typhoons last year, a record number since 1959.

This July was the first time in 69 years that Korea had no typhoon within the month. Instead, the country had the longest rainy seasons it ever experienced, which lasted 54 days before letting up on Aug. 16.