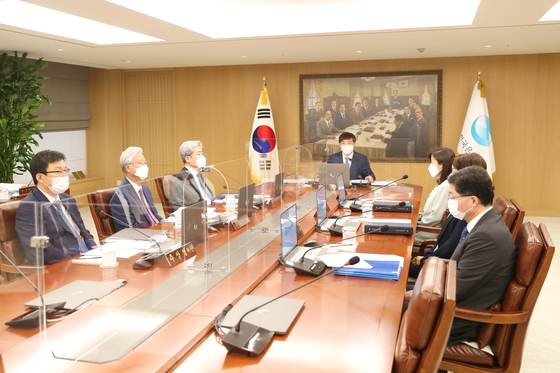 Bank of Korea's Monetary Policy Board meets on Thursday. [BANK OF KOREA]


The Bank of Korea significantly lowered its 2020 GDP growth forecast from negative 0.2 percent to negative 1.3 percent, factoring in the latest wave of Covid-19 infections.

Its forecast was made under the assumption that the second surge will last about as long as the initial outbreak early this year. If the high daily infection count lasts longer than anticipated, the economy could contract by 2.2 percent, the bank said.

"The domestic economy is forecast to improve gradually, but at a slower pace than expected. While the slump in exports will ease gradually, the recovery of private consumption is expected to be constrained by the recent resurgence of Covid-19 in Korea," the bank said in a release.

Maintaining a wait-and-see stance amid an overheated real estate market and rising stock prices, the central bank held the base rate at 0.5 percent.

The growth outlook cut was largely expected as the number of new daily Covid-19 cases has returned to triple digits and has remained there for more than a week. Newly reported cases hit 441 on Thursday, the first time the daily reading has been above 400 since March 6.

When the central bank released the minus 0.2 percent growth forecast in May, which was already a revision from the 2.1 percent forecast in February, it based its outlook on the assumption of a second-quarter peak in infections and a drop throughout the second half.

With the virus making a comeback, the chance of a full-year contraction is now high.

Korea has only recorded a negative full-year GDP growth rate figure twice since the statistic was first compiled in 1953: in 1980, when the GDP came in at minus 1.6 percent, and in 1998, when it was minus 5.1 percent.

The bank's worst case scenario is based in Level 2 social distancing. The highest is Level 3, where all gatherings of 10 or more are effectively banned.

"The reason why some economic indicators in the second quarter improved was because of the social distancing scheme and emergency funding was offered," said Sung Tae-yoon, economics professor at Yonsei University.

Private consumption in the second quarter increased by 1.4 percent quarter-on-quarter although it wasn’t enough to compensate for a sharp decline in exports. "Even if the current situation continues, without factoring in any additional negative elements, the GDP is expected to contract in the 2 percent range."

The central bank said it has more room to lower the base rate if necessary. The 0.5 percent rate is already a historic low for Korea after two cuts early this year when the country experienced the first wave of the virus.

"If there is a bigger shock to real economy from the coronavirus in the future, the monetary policy should respond," said Bank of Korea Gov. Lee Ju-yeol to the press Thursday.

"We still have room to respond to the shock with base rate. But it is already at a very low level, so we have to be very cautious about it."