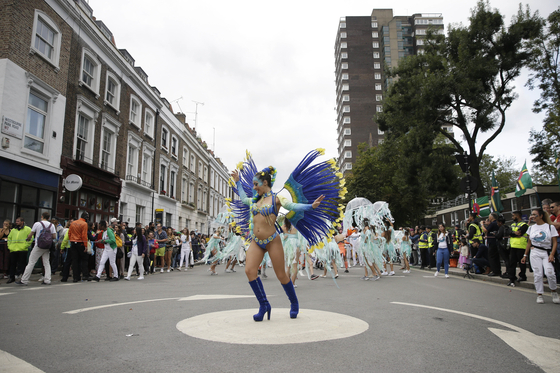 FILE - In this Monday, Aug. 27, 2018 file photo, costumed revellers perform in the parade during the Notting Hill Carnival in London. London's Notting Hill Carnival traces its roots to the emancipation of Black slaves and race riots in the city during the late 1950s. Organizers say the event is more important than ever amid the worldwide campaign for justice following the death of George Floyd in police custody. But their message of resistance and reconciliation will be delivered online worldwide this weekend after the COVID-19 pandemic forced the party to reinvent itself as a virtual event. [AP/YONHAP]

Organizers of Europe's biggest street fair, which traces its roots to the emancipation of Black slaves and race riots in London during the late 1950s, say the event is more important than ever amid the worldwide campaign for justice after George Floyd died in police custody in Minneapolis.

But their message of resistance and reconciliation will be delivered online worldwide this weekend after the Covid-19 pandemic forced London's Notting Hill Carnival to reinvent itself as a virtual event.

Even though it won't be the same, the carnival must be celebrated as a mark of Black liberation, said Clary Salandy, artistic director of Mahogany Carnival Arts, which creates brightly colored costumes that are essentially wearable sculptures — some 15-feet-high — for carnival dancers.

The Notting Hill Carnival is a product of the massive influx of Black immigrants who came to Britain from their former colonies to help rebuild the country after World War II.

The wave of immigration created tensions in British society, with widespread discrimination in housing and employment that boiled over into riots in 1958. The next year, Black activist Claudia Jones organized a precursor to the carnival, a dance at St. Pancras Town Hall that raised money for the defense of those arrested in the turmoil.

In 1966, the carnival took to the streets of Notting Hill, one of the few places in London where landlords would rent to Blacks. The celebration of Afro-Caribbean culture has grown into a two-day street party that attracts millions of visitors to a parade of costumed dancers, steel drum bands and smoky barbecue pits serving jerk chicken and plantains.

This year, elements of the event will be prerecorded and streamed to the world on Aug. 29-31, the long weekend that traditionally ends Britain's summer holiday season. One channel will focus on the parade, including the dancers who normally snake through the streets of Notting Hill wearing colorful headdresses, masks and movable art. Others will stream music, cultural discussions and presentations on food and drink

"From the comfort of your own home, you'll not only be exposed to the entertainment of the carnival, but you will also [see] the people behind the carnival ... and hear stories of how it came to be and the struggles that people have undergone," he said.

This year's themes include the Black Lives Matter movement and a celebration of Britain's National Health Service, which is working to control the pandemic that has hit the Black community harder than others.

Among those featured is Carolyn Roberts-Griffith, who recently showed off the immense replica of the scales of justice she will carry on her slender shoulders, tilting the canary yellow sculpture gracefully as she moves.

The costume embodies the fight for equal treatment under the law, the 59-year-old said.

"This is what we're asking," she said wiping a tear from her eye. "We're just asking for a balance."

Participants hope this year's carnival message will help to make up for the lack of human interaction. They want to convey a story in which passion and protest trump the pain that Floyd's death and the Covid-19 pandemic have brought to the Black community and other minority groups.

"As disastrous as this year has been, it has opened our eyes to so many struggles that other people are facing in the world," said Jez Smith, 23, showing off the 15-foot-tall sculpture he will wear to honor Floyd. "I think it's kind of giving people the momentum to speak up for change. We can't argue with change. Change is what we need."