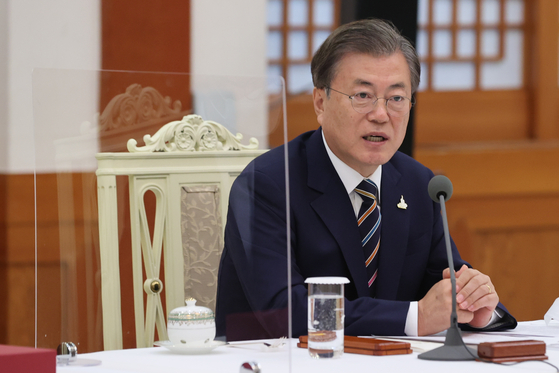 
President Moon Jae-in and Protestant leaders clashed on Thursday, after Moon blamed some churches for the latest resurgence of coronavirus infections in Korea and pressured the pastors to stop holding services at their churches.

Moon invited 16 leaders of the nation’s Protestant community on Thursday to ask for their cooperation, but also criticized some churches that have defied the government's preventive measures.

“A particular church rejects the government’s preventive measures and actually obstructs our efforts,” Moon said during the meeting. “As of now, about 1,000 patients are associated with the church, and another 300 are confirmed to be infected due to a rally attended by the church members.”

Although Moon did not mention the name of the church, his comments were clearly directed at the Sarang Jeil Church in Seongbuk District, central Seoul, led by Pastor Jun Kwang-hoon.

Moon said the church and Jun owe an apology to the people, yet they are instead promoting a conspiracy theory and refusing to cooperate with the government's efforts.

“They are committing incomprehensible and absurd actions under the name of a church," Moon said. “The entire nation is facing the consequences, but the Protestant community faces the greatest damage.”

“Half of the new infections in the resurgence started in August took place in churches,” Moon said, adding that he understands congregants' desires to attend services during a time of national hardship.

“But this virus is dangerous to all kinds of religions. No one is an exception from the fact that you will be infected when you have close contact and when you don’t wear a face mask. Services and prayers will give you peace of mind, but it won’t protect you from the virus. [...] All religions must accept that preventive measures are not a matter of faith but a matter of science and medicine."

The Protestant community, however, said it will not accept an indefinite ban on holding services in churches.

Reverend Kim Tae-young, president of the United Christian Churches of Korea and the head of the Presbyterian Church of Korea (TongHap), said he is regretful that churches have become the source of cluster infections.

But he argued that the solution cannot be an indefinite ban on church services.

“During the meeting with senior aides on Aug. 24, the president said freedoms of religion, assembly and speech can never take priority over protecting the people from the enormous damages we are suffering now,” Kim said.

“Religion can be a hobby for some, but for those who value their faith as importantly as their lives, freedom of religion is something they cannot surrender. I was shocked, because the government seemed to think it can easily restrict this freedom of religion and shut down services.”

Kim asked the government to not treat Protestant churches, Buddhist temples and Catholic churches the same as businesses, stressing the unique role of religion.

He proposed that the government cooperate with churches to hold services in a safe environment. Strict guidelines must be created to allow services and prayers at the churches while adhering to preventive measures, he said.

Moon expressed his appreciation for Kim’s suggestion, according to Blue House spokesman Kang Min-seok, but stressed that the law gives the government the power to restrict services when necessary to prevent the spread of infectious diseases.

“Church leaders must accept this objective reality,” Moon was quoted as saying by Kang.

Moon said there are 60,000 churches in the country, and it is impossible to certify which churches are safe to have on-site services.

“The best resolution is normalizing our lives by stabilizing the outbreak as soon as possible,” Moon told the Protestant leaders. “I ask you to cooperate with the government during this time period.”