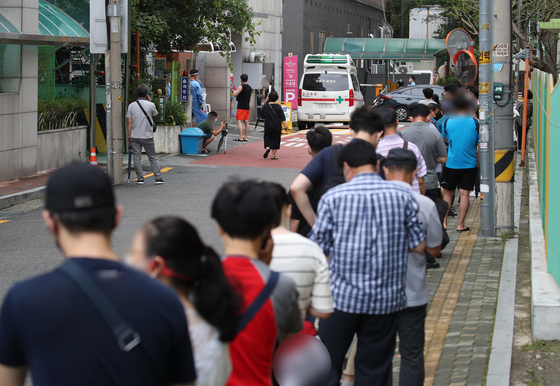 People line up at a Covid-19 testing site in Guro District, western Seoul, Thursday, where eight people from the same apartment building tested positive for the virus. [YONHAP]

Korea added 441 new cases of the coronavirus Wednesday, nearly a six-month high as the country grapples with sporadic clusters all over.

It was the highest number of daily infections since March 6, when 483 patients were reported.

Of Wednesday’s total figure, 154 cases were detected in Seoul, the highest that the capital has ever seen, the Korea Centers for Disease Control and Prevention (KCDC) revealed Thursday morning.

Among the nation's 17 major cities and provinces, Sejong City was the only place that didn’t detect a single new infection Wednesday.

In all, there were 434 local infections.

Out of seven imported cases, three were from the Philippines, two from the United States and one each from Indonesia and Kazakhstan.

As of Wednesday at midnight, Korea had counted 18,706 patients in total, the 74th highest in the world.

With many infections recently coming from the Seoul metropolitan area encompassing Seoul, Incheon and Gyeonggi, health officials noted Thursday that the combined figure of infections in all three areas was about to surpass the total number of cases Daegu has seen so far.

Daegu was the center of Korea's first outbreak in February and March.

By Wednesday at midnight, Seoul had counted 3,386 patients in total, Gyeonggi 2,884 and Incheon 644. All together, they add up to 6,914 patients. Daegu had detected 6,999, the vast majority traced to the Shincheonji Church of Jesus. 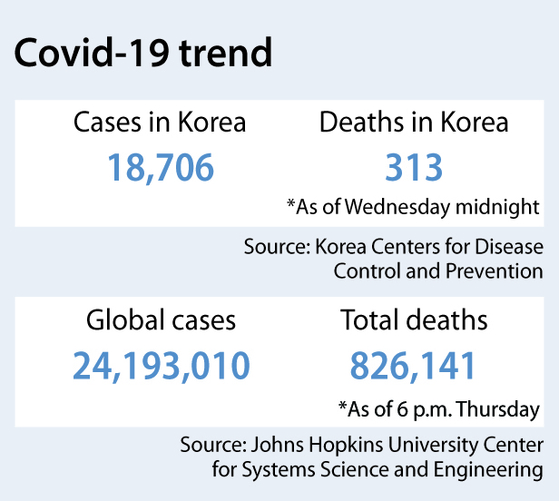 The Shincheonji Church remains the largest cluster Korea has ever seen, with 5,214 cases tallied across the country. The major cluster that Korea is now undergoing, which emanated from the Sarang Jeil Church in Seongbuk District, central Seoul, on Aug. 12, reached 959 cases as of Thursday noon, 26 more than Wednesday noon.

A cluster linked to an anti-Moon Jae-in rally held in Gwanghwamun, central Seoul, on Korea’s Aug. 15 Liberation Day has also been spiraling out of control this week, with infected patients transmitting the virus to their families, workplaces and social circles like churches.

By Thursday noon, the rally cluster reached 273 cases, up 54 from the previous day. The KCDC said all 273 people were separate from the Sarang Jeil Church cluster.

Health officials believe Sarang Jeil Church members spread the disease that day, as hundreds participated in the rally despite warnings from the government to stay home and self-isolate.

The Korean central government’s Covid-19 command center said Thursday morning that at least 639 people who are either congregants of the politically controversial church or had visited the church recently were found to have participated in the rally, 79 of whom later tested positive for the virus. The positive rate could most definitely go up in the coming days, health officials hinted, because only 241 people have received their test results so far, while 398 either haven’t been tested at all or are waiting for their results.

Overall, the command center said about 70 percent of some 5,900 people who are enlisted worshippers of the church or visited recently still haven’t gone through testing, including some who can’t be reached or claim they aren’t affiliated with the church.

The church initially handed over a list of 4,066 congregants and visitors to the government, but after an on-site investigation of the church last Saturday, the command center said it has compiled a list of 5,912 people, of which only 1,901 people, or 32 percent, have been tested.

Virus testing in regards to the Aug. 15 demonstration is also making slow progress.

Among some 51,000 people who either protested in Gwanghwamun that day or were in the downtown Seoul area, only 8,000 people, or 16 percent, have completed testing, the command center said.

Among the country’s burgeoning sub-clusters connected to the Aug. 15 rally is one at Seong Rim Church in Gwangju. A protester who goes to the Methodist church tested positive for the virus on Monday, and 30 other congregants who attended a service at the same time as the protester received positive results Wednesday, as health officials ordered some 700 people who had contact with the protester to get tested.

In Guro District, western Seoul, at least eight residents of the same apartment building got infected, and the first patient’s husband went on transmitting the virus to 20 of his colleagues at a meat processing factory in Geumcheon District, southern Seoul.

How the first patient got infected is not known.

Seoul health officials Thursday said they were investigating the apartment’s elevator, sewer and ventilation system to check how she spread the virus to her neighbors, with whom she seems to have had no direct contact.

On whether the nation’s social distancing level would soon be elevated from Level 2 to Level 3, health authorities said Thursday they were “considering all options” and seriously discussing possible scenarios, including how stringently they would impose restrictions in the final, third level.

Guidelines of Level 3 revealed earlier this year showed many businesses would either be ordered to close entirely or at 9 p.m. depending on their risks of possible virus transmissions, while subways would be “reviewed” for possible closure as well.