'Starry Beach' immerses its audience in another world

'Starry Beach' immerses its audience in another world 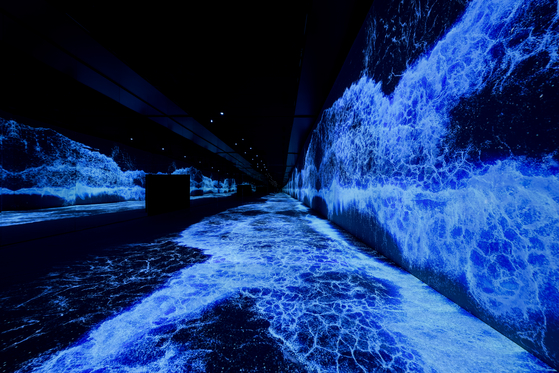 
“If you haven’t been on vacation this year, this might be a nice alternative."

This was how a Kukje Gallery official teased its newest exhibition, which opened on Aug. 13.

Located in K3, one of Kukje Gallery’s three exhibition halls, "Starry Beach" is the inaugural exhibition of a’strict, the media artist unit of the acclaimed digital design company, d’strict. Nine members of the unit participated in the creation of the computer simulation, which took four months to complete.

There is just one word for the immersive piece — breathtaking.

The entire K3 space has been taken over by a’strict and transformed into a surreal landscape.

“The installation that has been designed specifically for Kukje Gallery’s K3 space instantly provides a multisensory experience for the viewer,” said the gallery.

The space has been shrouded in darkness, making the high-definition projections even more striking. In addition, three of the room's four walls have been fitted with mirrors, creating a slightly disconcerting experience when you first enter the installation.

The first sense to be engaged is sound. Even before you round the corner to enter the space, the sound of waves crashing onto a beach becomes clearly audible. The repetitive, rhythmic recording has an almost meditative quality, and visitors quickly find themselves lost in thought, or lost in the calm.

While the projections are entirely digitally generated, the sound of the waves crashing was recorded at a beach in Korea and was synchronized with the images, according to d'strict CEO Sean Lee.

With your sense of sound now engaged, you can take in the projections of the crashing waves on the 6-meter-high (20-feet-high) wall and floor.

Two projectors have been fitted on the ceiling — one projecting the artist unit’s digital interpretation of waves onto one wall of the room, and the other projecting a mirrored image onto the floor. The space itself is reminiscent of a house of mirrors, a traditional attraction often seen at old-timey fairs and amusement parks, which uses reflective surfaces to confuse and delight participants.

Although it may have been unintentional, visitors may need a moment to let their eyes adjust when entering a’strict's house of mirrors.

Once you do, your sense of sight will be greeted with a stunning, high-definition digital interpretation of one of nature’s greatest powers.

In white and blue, glistening waves crash across the pitch-black space, which was designed to appear as a starlit night. The projections play on a three-minute loop, but the patterns of the waves alternate so visitors don’t feel like they are watching the same thing over and over again.

As you walk around the room, it's easy to imagine being on a secluded beach at high-tide. Perhaps the most perplexing part is that you don’t feel any sand between your toes or water gliding over your feet as you wander around the space.

“The unit’s unprecedented digital interpretation of waves and ability to powerfully choreograph water within an interior architectural space successfully envision the marriage of contemporary art and technology at its finest, stimulating the viewer’s subconscious and evoking our shared associations with and reliance on water,” the gallery said. 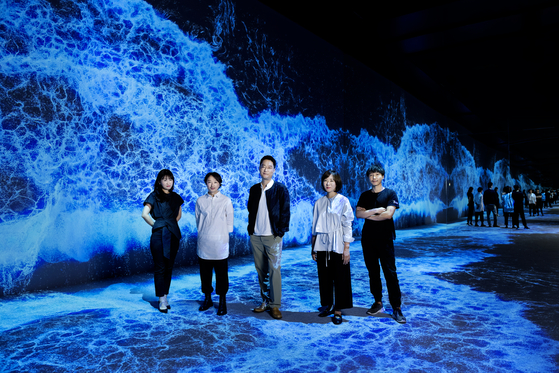 The name "a’strict" is a derivative of "art+strictly," underscoring the unit’s commitment to art.

This commitment is linked to the two founding philosophies of d’stict — “to endlessly polish and hone the strict practice of design [design+strictly], yet remain unhindered by and traverse the discrete fields of art, design and technology with exceptional creative freedom."

While this is the first exhibition for a’strict, d’strict recently garnered attention both at home and abroad with its public art project titled "WAVE."

Another immersive video art installation, it replicated a massive wave crashing onto a huge wraparound LED display sitting atop Coex Artium in Seoul’s Gangnam District, southern Seoul. It was installed in May and used anamorphic illusion, a type of projection technique used to highlight the illusion of depth and three-dimensionality.

Lee said they chose to work with waves for a second time because “I wanted to give people living in the city something opposite to the cityscape — nature, and the sea in particular, because they can’t experience it without visiting in person.”

Following the success of "WAVE," d’strict decided to form a’strict to focus solely on the creation of visual art.

“The bold attempt to blur the boundaries between d’strict and a’strict is a noteworthy feat of experimentation that parallels d’strict's reputation as a company that transcends the perimeters of art, design and technology in order to explore the boundless potential of media. a’strict's debut solo exhibition will highlight the growing connection between design and art, catalyzing more public projects that generate a sense of community and place, ultimately signaling the birth of a new generation of media artists,” the gallery added.

The "Starry Beach" installation will be open to the public until Sept. 27 at the K3 exhibition space of Kukje Gallery located in Samcheong-dong, central Seoul. Admission is free.

On Sept. 25, d’strict will open doors to Arte Museum, a space dedicated to immersive artwork related to nature, in Aewol on Jeju Island.