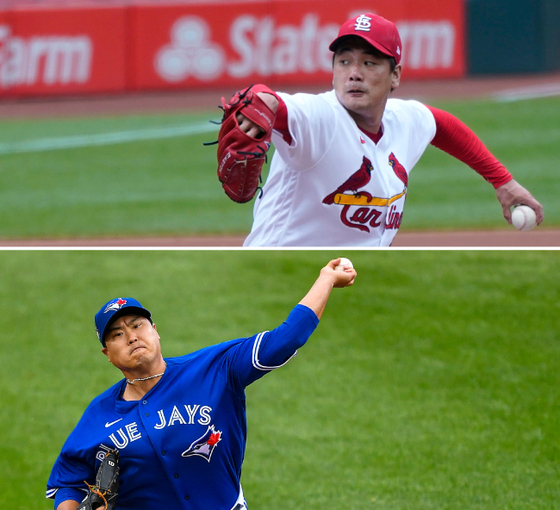 
The dream of Ryu Hyun-jin of the Toronto Blue Jays and Kim Kwang-hyun of the St. Louis Cardinals both picking up wins on the same day will have to wait a little longer, as the two's anticipated starts on Thursday didn't go as planned.

Both Ryu and Kim were expected to start on Thursday, with Ryu starting against the Boston Red Sox and Kim in the first game of a double header against the Pittsburgh Pirates. But as the Red Sox joined a nationwide sporting boycott in protest of the shooting of Jacob Blake in Wisconsin, Ryu's game was postponed.

Kim's game against the Pirates went ahead, and as planned, the Korean pitcher started in the first game of the double header. This was Kim's third start for the Cardinals and Kim proved his win in his most recent start wasn't just luck.

Tossing 80 pitches throughout six innings, Kim gave up one walk and three hits while striking out three. The Pirates did get one run across while Kim was on the mound, in the fourth inning, but it didn't count against Kim's numbers as it was due to a throwing error.

Despite Kim's solid performance, he wasn't especially happy with the game.

“Overall my command was not good compared to last time,” Kim was quoted as saying on the Cardinals website. “After the first error, I had in my mind that I shouldn’t allow the runner or a run. I had that in mind. But that increased my pitch count, so I wasn’t really effective today.”

As Kim left the mound when the Cardinals were tied at 1-1, he walked away with a no decision. As the Pirates added three more runs in the eighth while the Cardinals only scored two, the Pirates took home a 4-3 victory.

Kim started out his big league season in the Cardinals’ bullpen, but as a number of players tested positive for Covid-19, he was given a shot as a starter. Having started in three games so far for the Cardinals, Kim seems to have proven his competitive edge.

Kim is expected to make another start against the Cincinnati Reds on Tuesday, local time, or at 7:40 a.m. on Wednesday morning, Korea time.

A day after Kim’s performance, Ryu had another solid start for the Blue Jays but had to walk away with a no decision against the Baltimore Orioles at Sahlen Field in New York on Saturday.

Ryu once again got off to a strong start by throwing five scoreless innings. Heading into the top of the sixth inning with the Blue Jays holding a 2-0 lead, Ryu ran into some trouble.

While the bases were loaded with two outs, Ryu ended up giving up two runs. At first, this was recorded as an error by third baseman Travis Shaw but was quickly changed to an infield single by Orioles’ left fielder Ryan Mountcastle.

Due to this, Ryu walked away with two earned runs for the game and his ERA went up from 2.68 to 3.16. The Blue Jays appealed the decision and Ryu’s ERA was adjusted to 2.92 with just one earned run from that game.

Ryu left the mound while the two teams were tied at 2-2. By forcing the game into the 10th inning, the Blue Jays ended up with a thrilling 5-4 victory. The Orioles scored a run at the top of the 10th, but the Blue Jays scored two for the win.

“I was in the clubhouse when it happened,” Ryu was quoted as saying on the Blue Jays website. “But we all screamed. We were all so excited. We were down by a run with two outs and we definitely needed it. [Randal] Grichuk, to his credit, gave us that win single-handedly.”

Although Ryu picked up a no decision, even with a quality start, he showed his satisfaction in his pitches for the game.

“I think I’m getting better as we progress into the season,” Ryu said after the game. “I think I previously mentioned how, as a starting pitcher, I always want to put the team in a position where they can win. I think I was able to do that for most of the time. Things have been progressing nicely for me.”

Ryu definitely seems to be getting back on form in the month of August as he has a 1.29 ERA. As the Blue Jays’ bullpen has been struggling, Ryu has only picked up two wins and a loss for the season but he’s proven to be the starter the Blue Jays needed.