Son looks strong in friendlies ahead of 2020-21 season

Son looks strong in friendlies ahead of 2020-21 season

The 2019-20 English Premier League (EPL) season may have already ended, but Son Heung-min of Tottenham Hotspur is continuing his solid form.

Having finished their season with the round of 16 UEFA Champions League match against RB Leipzig — which Spurs lost with an aggregate score of 4-0 — the London club has been playing a series of preseason friendlies, starting from Aug. 21. 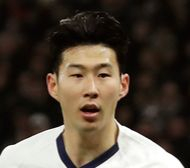 
Despite the midseason interruption from Covid-19, Son had another strong 2019-20 season, scoring 18 goals throughout 40 matches. Continuing that momentum, Son got off to a strong start with two goals in Spurs’ first friendly against Ipswich Town on Aug. 22, at Tottenham Hotspur Stadium in London. Son scored in the 10th and 29th minutes to help Spurs pick up a 3-0 victory.

Then, against Reading on Aug. 28, Son scored another in the 39th minute to help Spurs pick up a 4-1 victory in their second friendly. Not only was Son able to score in two straight matches, but his goal against Reading was also quite meaningful as the match was played on the fifth anniversary of the day Son signed with Spurs.

Although his scoring streak ended, Son was back in action in Spurs’ third friendly match against Birmingham on Aug. 29. Spurs won the match 1-0.

Spurs ended their 2019-20 season at sixth, with 16 wins, 11 draws and 11 losses, totaling 59 points. Under new manager Jose Mourinho, Spurs failed to qualify for the 2020-21 UEFA Champions League, as only the top four EPL clubs automatically qualify for the next season's tournament.

Before Spurs’ 2020-21 season officially starts with a match against Everton on Sept. 13 at Tottenham Hotspur Stadium, Spurs will compete in one more friendly, away against Watford on Sept. 5.