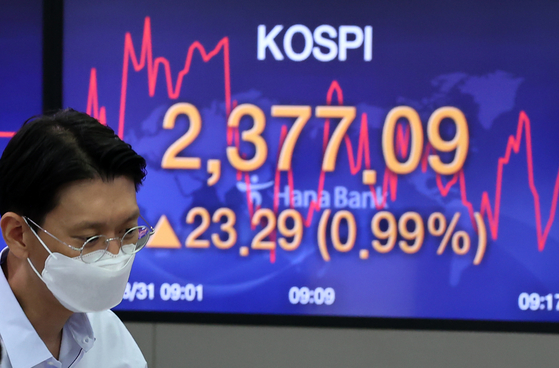 A screen shows the Kospi at the start of the day in a trading room at Hana Bank in Jung District, central Seoul, on Monday. [YONHAP]


Stocks dipped more than 1 percent Monday, as foreign net sales soared to an all-time high amid pandemic fears. The won fell against the dollar.

The index started out strong on dovish signals from the Fed but turned to a loss on disappointing Covid-19 case numbers.

"Investor sentiment seems to have weakened from the spreading social distancing move," he added.

Korea added 248 new Covid-19 cases, marking a drop from 299 cases identified the previous day. But health authorities said the drop may have resulted from fewer virus tests over the weekend.

The local currency closed at 1,187.8 won per dollar, up 3.5 won from the previous session's close.