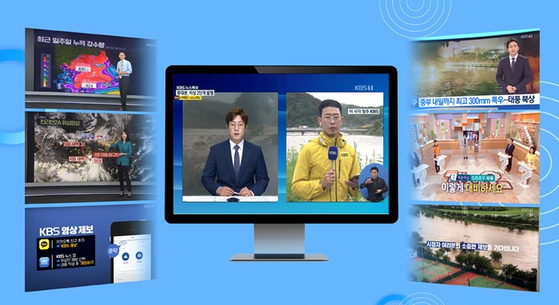 KBS will hold a forum under the theme of ’Sustainability and Public Responsibilities of Public Media KBS amid the changing media ecosystem“ on Tuesday. [KBS]

National public broadcaster KBS will hold a forum with viewers to discuss survival strategies amid a changing media landscape on Tuesday, KBS announced on Monday.

The forum dubbed “KBS Viewers Forum” will start a week-long celebration of the 30th anniversary of the viewer committee's launch held under the titled "The Viewer's Week" from Sept. 1 to 4.

The forum will be held under the theme of “Sustainability and Public Responsibilities of Public Media KBS amid the changing media ecosystem” and divided into four sessions at the KBS Art Hall in Yeongdeungpo District, western Seoul, on Sept. 1 at 4 p.m., KBS said.

The forum’s four sessions are: importance of disaster broadcasting, social responsibilities the viewers expect from KBS, new ways of boosting viewer participation, and how to stabilize finances.

While terrestrial broadcasters have lost their monopolistic status, KBS wants to ask the viewers, who are the owners of the broadcasting network, how KBS can bring back trust and competitiveness by listening to viewers’ harsh criticisms through this forum.