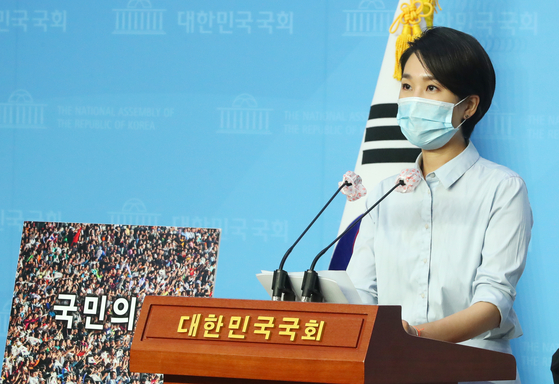 
The opposition United Future Party (UFP) announced a tentative new name on Monday, rebranding itself as the "People’s Power."

The People’s Power was the tentative English translation for the party’s new moniker as of Monday, which in Korean reads as Gukmineui Him, according to the party’s spokesperson. The official name in English will be confirmed following the meetings through Wednesday.

The party’s new name was selected from nearly 17,000 suggestions submitted by the citizens via an online survey earlier in the month.

“One of the most used words in these submissions was ‘people,’” said Kim Chong-in, interim leader of the UFP, speaking to the press at the Assembly on Monday following the party’s announcement of its new name. “Using the word ‘people’ seemed quite representative of the values put forward by the Constitution as well.”

Other oft-repeated words in the submissions included "freedom," "Korea" and "future," according to the party.

Kim said he was not concerned with the name's similarity to the liberal People’s Party.

“Gone are the days when the names of political parties need to state word for word what our ideological beliefs are,” he said.

It is not uncommon for political parties in Korea to change their names, especially prior to elections or after a scandal, in order to disassociate themselves from the past blunders.

The UFP was the name that conservative politicians selected in February after merging several conservative parties — the Liberty Korea Party, New Conservative Party and the Advance On Party — ahead of the April general elections.

The Liberty Korea Party, the largest conservative faction at the time, was the new name the party had selected in February 2017, forgoing its previous title, the Saenuri Party, in the hope of disassociating itself with the corruption scandal in which then-President Park Geun-hye was mired.

Most recently, the UFP has faced heavy criticism for the massive rally on Aug. 15 in Gwanghwamun Square in central Seoul by conservative groups, which has been blamed in part for a recent explosion of Covid-19 cases in the Seoul metro area.

The Korea Centers for Disease Control and Prevention (KCDC) said that at least 162 rally-goers had tested positive as of Monday at noon, and that the cluster had given rise to at least 152 additional cases linked to at least nine churches located in Seoul, Gyeonggi, South Chungcheong, Gwangju, Daegu and one hospital in Seoul.

“Many of the members of the UFP are none other than those of the Liberty Korea Party, the party that received the verdict of the people after former President Park’s scandal and witnessed the people’s power,” said DP Rep. Jung Chung-rae on his Facebook account on Monday. “What irony there is in choosing such a name.”

The DP had changed its name from the New Politics Alliance for Democracy (NPAD) in December 2015, after using that handle for two years, to disassociate itself from NPAD’s co-founder Ahn Cheol-soo after he defected from the party. Prior to that, the party was called the Democratic Party, Democratic United Party and Uri Party, amongst other names.

Departing from the past