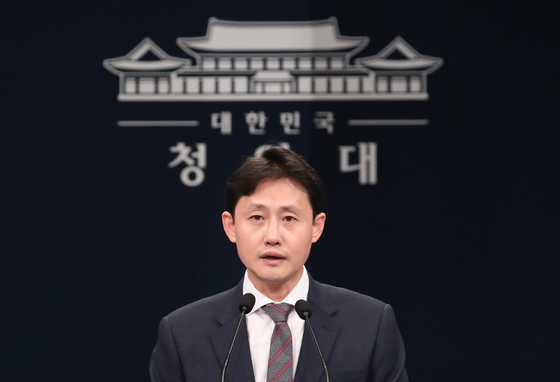 Yoon Jae-kwan, deputy spokesman for the Blue House, was promoted as the new secretary for public information on Monday. [YONHAP]

Yeo is a former journalist with The Hankyoreh newspaper. He owned one apartment in Mapo District of western Seoul and a property right for a new apartment in Gwacheon, Gyeonggi. He occupied his Blue House position for one year and seven months.

“With the latest reshuffle, the presidential secretariat has zero members with multiple homes,” said a Blue House aide.

To prove the administration’s commitment to its antispeculation policy, senior officials were pressured to sell any second homes.

When the Blue House first began asking its officials to ditch their second homes in December, there were 20 senior aides who owned more than one home. Over the past months, some sold their properties to stay in the Blue House while others quit.

Yeo’s successor, Yoon, joined the Blue House after Moon took office in May 2017. He is credited for planning the long private chat between Moon and North Korean leader Kim Jong-un during their first summit in 2018 at the truce village of Panmunjom. The pair’s stroll along a footbridge at the inter-Korean border was the highlight of the summit.

Yoon was named the deputy spokesman of the Blue House in February, and he was promoted to replace Yeo six months later.

Moon named Chang Yong-seok, a researcher at the Institute for National Security Strategy, as secretary for security strategy, replacing Noh Kyu-duk. Noh was moved to serve as secretary for peace planning.

Park Jin-sub, former president of Seoul Energy Corporation, was named the secretary for climate and environment.

According to the Blue House, the six new secretaries will be formally appointed on Tuesday.