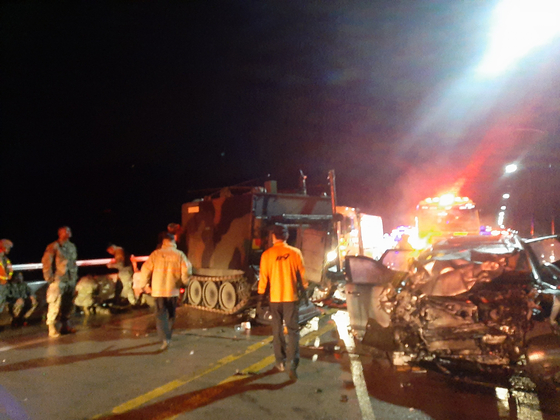 The accident site in Pocheon, Gyeonggi, where an SUV carrying four passengers hit the back of a U.S. armored vehicle Sunday morning. All four people were killed. [GYEONGGI NORTH FIRE DEPARTMENT]


A sports utility vehicle (SUV) collided with a U.S. armored vehicle in Pocheon, Gyeonggi, on Sunday evening, killing all four Korean civilians in the SUV.

According to the Pocheon Police Precinct, the car hit the rear of the U.S. armored vehicle at a high rate of speed on a bridge in the vicinity of the Rodriguez Live Fire Complex operated by the U.S. Forces Korea (USFK) at around 9:30 p.m.

The four passengers in the car — two men and two women, all in their 50s — were seriously wounded and transferred to a nearby hospital. All four succumbed to their injuries shortly afterwards.

A subsequent investigation showed the front end of the SUV was damaged beyond recognition, while the continuous track on the right side of the U.S. armored vehicle was also damaged.

After colliding, the SUV bounced onto the opposite side of the road while the U.S. armored vehicle hit a rail along the side of the bridge, police said.

The victims were two couples residing in Pocheon who were returning from a gathering, police said.

No details have been released as to whether the driver of the SUV had been drinking, though police said an investigation was ongoing.

The armored vehicle was part of a convoy that included another armored vehicle, both moving at a slow pace from the USFK firing range in Pocheon to a base in Cheorwon, Gangwon, when the accident occurred.

The SUV was traveling over the speed limit and its driver may not have seen the armored vehicle, police said. The car had made a stop just a few minutes before the accident during which the driver was switched.

“Given that the front passenger side of the SUV hit the back of the armored vehicle, it is deduced that the SUV [driver] was not clearly attentive to the road and rapidly turned the steering wheel before the collision,” said a police spokesperson.

The National Forensic Service is conducting autopsies on the victims as well as analyzing footage from the SUV’s black box, police added. The collision was believed to have seriously damaged the recording device.

This is not the first accident involving an armored vehicle operated by U.S. forces to occur in Korea. In 2002, a U.S. M60 armored vehicle accidentally fatally crushed two Korean female middle school students on a highway in Yangju, Gyeonggi.

The U.S. soldiers involved in the incident were found not guilty of negligent homicide in a subsequent court martial, which inflamed anti-American sentiment in Korea and sparked nationwide protests.