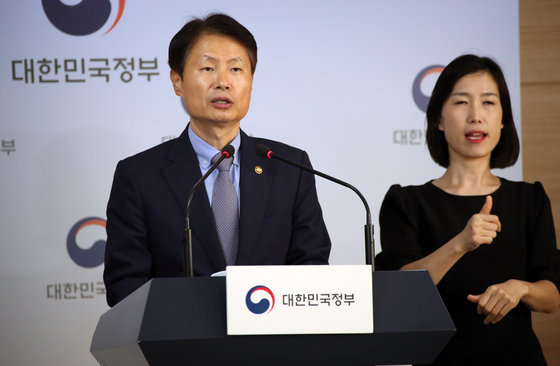 Vice Health Minister Kim Kang-lip in a press briefing Monday said that the clinical exam of the Korean Medical License Examination will be postponed by one week as doctor hopefuls are boycotting the test.


The government announced Monday it will postpone the state-run medical licensing exam by one week, as medical students plan to boycott the test amid nationwide strikes by trainee doctors.

So far, 89 percent, or 2,832 of 3,172 people signed up for the 2021 Korean Medical License Examination set for September and October have canceled their applications, according to organizers of the exam. This week's exam had been scheduled to take place Tuesday.

Vice Health Minister Kim Kang-lip in a press briefing Monday said that the clinical exam of the Korean Medical License Examination will be postponed by one week “to minimize the damages" against the medical students.

The health authorities, initially looking to push forward with the medical exam, took a step back amid the continued standoff between the government and doctors over the government's medical workforce reform plans.

The medical licensing exam is divided into a clinical exam and a separate written portion scheduled for January. The medical students' refusal to take the clinical exam has led to immediate concern over a shortage of licensed young doctors. The first exam scheduled between Sept. 1 to 18 will be pushed back from Sept. 8 to 25.

Son Young-rae, a spokesman for the Ministry of Health and Welfare, initially said in a briefing earlier that day that the ministry was still encouraging students to take the exam as originally scheduled.

“The trainee doctors partaking in the collective action are not receiving any damages in terms of their employment, livelihood, medical license or status," Son said. "It is not fair that the sick or critical patients are the ones whose lives are being endangered.”

The Korea Health Personnel Licensing Examination Institute said that it was checking with each individual whether they had canceled out of their own will or out of peer pressure.

The Korea Association of Medical Colleges on Monday urged the government to delay the exam for at least two weeks, or until the Covid-19 situation stabilizes.

Residents and interns are more than 10 days into their strike after staging a phased walkout starting Aug. 21. They are protesting the government’s plans to increase the medical school admissions by 400 annually, to a maximum of 4,000 from 2022 to 2031. Admission to medical schools is currently capped at 3,058 students annually.

The Korean Intern and Resident Association (KIRA)’s emergency task force voted to continue their strike Sunday after a first round of voting didn’t meet quorum.

President Moon Jae-in on Monday urged striking trainee doctors to return to work and said it is “regrettable that the doctors are not ceasing their collective action.” He stressed that “doctors are never more needed by the people” and left the door open for future consultations with the medical community over reform plans.

Prime Minister Chung Sye-kyun on Sunday also expressed "deep regret" over KIRA’s decision to continue the indefinite walkou, saying the “government has no choice but to respond by law and principle.”

On Friday, the government filed a police complaint against 10 striking trainee and fellow doctors who violated government orders to return to their jobs last Wednesday.

Those that do not abide by the government's order could face a jail sentence of up to three years or a fine of less than 30 million won ($25,000). Doctors could even have their medical licenses revoked.

The Korean Medical Association (KMA), which represents some 130,000 doctors, held a three-day walkout of fully-licensed doctors from last Wednesday to Friday, its second general strike in August. The KMA warned it plans to launch an indefinite strike on Sept. 7.

The KMA and KIRA have been opposed to a set of government reform plans announced in July: an increase in medical school admission quotas to increase rural health care coverage; establishment of a public medical school; the extension of national health insurance coverage to Korean traditional medicine; and the expansion of remote medical services.

The association argues that the issue is less of a shortage of doctors and more of a fundamental problem in the health care system.

Doctors and fellows have taken over the tasks usually held by the trainees for the time being. But some doctors in fellowship training in major general hospitals also joined the walkout last week, leading to a strain in the medical workforce and in the running of emergency rooms and intensive care units.

The government said Monday that it will conduct inspections of 10 additional emergency rooms and intensive care units.

The extended strike by trainee doctors is prompting some major general hospitals to further reduce medical services in some areas.

According to the hospital, it reduced internal medicine appointments by around 22 percent Monday, accepting some 2,609 patients compared to Aug. 10, when it received 3,343 patients.

Other major general hospitals in Seoul are also discussing service reductions and decreases of scheduled surgeries to deal with the shortage of hands.

However, worries continue that if the walkout persists, there could be serious impacts on the remaining medical staff’s ability to carry out their tasks and uphold the hospitals.

The situation could especially become more serious if medical professors decide to join the strike in support of the trainee doctors and to vent their frustrations at the government filing police complaints against trainees who refused to return to the emergency rooms.

In protest of the government’s orders to return to work, more than 93 percent, or 895 of 953 trainee doctors, and over 87 percent, or 247 of 281, of fellow doctors, at SNUH’s Seoul, Bundang and Boramae branches have tendered their resignations, according to the hospital’s association of residents and interns.

However, the trainee doctors acknowledged the coronavirus situation and agreed to volunteer their services for Covid-19 treatment.

The Korea Alliance of Patients’ Organizations called for compromise from both the government and doctors Monday, urging doctors to return to their jobs and normalize treatment of patients. It also argued that the government bears responsibility for the situation that has led to the doctors’ strike because of lack of communication.

The public however is voicing concern and frustration over the trainee doctors’ walkout.

A Blue House petition gained over 356,000 signatories as of Monday afternoon voicing opposition against the medical students who collectively canceled their medical license exam applications to get a chance to retake it. The petition read that the medical students' actions are “mocking” the people’s gratitude toward medical professionals in general for their Covid-19 response — which also includes nurses, radiologists, caretakers, quarantine officials, emergency responders, firefighters and police.

Some people have begun boycotting hospitals participating in the strike to voice their frustrations as patients are being impacted.

The “Boycott Striking Hospital” Facebook page has over 2,000 followers, and its website likewise has nearly 400 posts since it was launched. 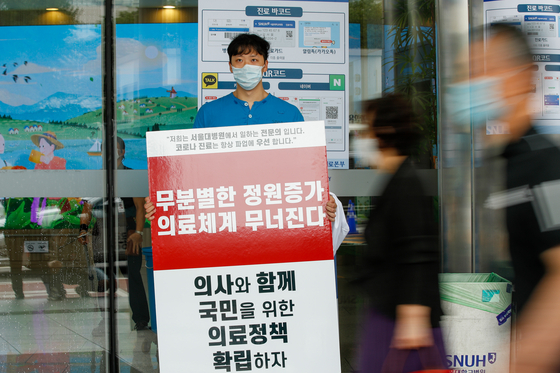 A trainee doctor stages a one-man rally Monday at the Seoul National University Hospital (SNUH) in central Seoul and holds up a picket protesting the government's plan to increase medical school admissions, saying it will lead to the "collapse of the health care system." [NEWS1]