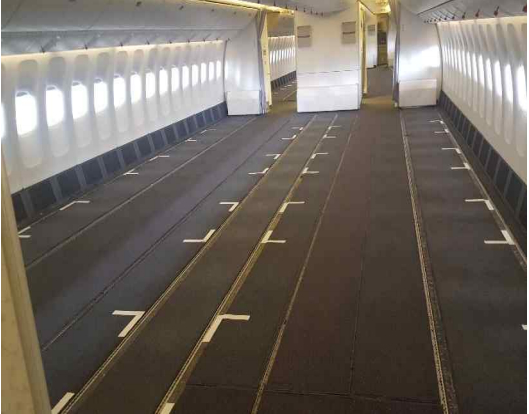 An example of a passenger plane with the seats removed to transport more cargo. [SCREEN CAPTURE]


The Ministry of Land, Infrastructure and Transport has approved a request by Korean Air Lines to remodel passenger aircraft to carry more cargo.


The announcement gives Korean Air Lines the green light to remove seats from passenger aircraft, something the airline has wanted to do since demand for flights declined and the profitability of cargo transportation increased following the Covid-19 outbreak earlier this year.

“As the recovery of travel demand continues due to the impact of Covid-19, [the ministry] approved the reconstruction work of idle passenger aircraft after evaluating the suitability,” wrote the ministry in a statement Tuesday.

Korean Air Lines applied to remodel the interior of its Boeing’s B777-300ER aircraft on Aug. 20. It is reconstructing two planes.

The ministry said it confirmed the safety of the reconstruction work with the Seoul Regional Office of Aviation, which is affiliated with the ministry, and the plane's manufacturer.

Following the approval, Korean Air Lines can remove 227 seats from economy class and 42 seats from business class. It can also remove electric wiring inside the cabin and add rails on the floor to prevent cargo from moving during flight.

The approval allows the airline to carry an additional 10.8 tons of cargo, totaling 32.8 tons, a 49 percent increase from the previous 22 tons.

The ministry “plans to actively support low-cost carriers to transport cargo in passenger plane cabins based on safe aviation guidelines,” the ministry added.

Although airlines are one of the hardest hit industries from the pandemic, full-service carriers Korean Air Lines and Asiana Airlines managed to turn a profit in the second quarter on increased profitability of cargo transportation.