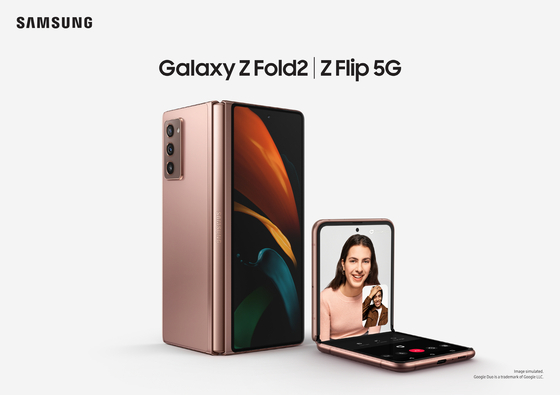 Samsung Electronics' next foldable device, the Galaxy Z Fold2, will hit shelves in Korea on Sept. 18.

The electronics company held a virtual Unpacked event for its third foldable phone on Tuesday. It had offered a glimpse of the device at an earlier event in August, but on Tuesday Samsung officially unveiled the Fold2, including its price and specifications.

The device is powered by a 7 nanometer, 64 bit Octa-core processor and comes with 12 gigabites of RAM storage and a 256 gigabite memory. The Galaxy Z Fold2 comes with a slightly larger battery, at 4,500 milliampere hours.

In appearance, the Fold2 looks a lot like the Fold, opening like a book with a vertical hinge. But as the company’s mobile business head Roh Tae-mun puts it, the device is the outcome of customer feedback received from Fold users last year.

“With the launch of the Samsung Galaxy Z Fold2, we closely listened to user feedback to ensure we were bringing meaningful improvements to the hardware, while also developing new innovations to enhance the user experience," he said.

Both the cover and main screen inside the Fold2 are larger, with reduced bezels. The change is immediately noticeable on the cover screen, extended to 6.2 inches from the Galaxy Fold’s boxy 4.6 inches. The main display is enlarged to 7.6 inches, adding 0.3 inches to the Galaxy Fold’s. For both, Samsung cut a notch at the top of the screen for the camera, instead of placing it on a chunky outer bezel.

The overall device is thinner, measuring between 6 to 6.9 millimeters (0.24 to 0.27 inches) when folded. It’s 6 grams heavier than its predecessor, at 282 grams. Five cameras are included, ranging from 10 million to 12 million pixels — one on the cover, one inside the fold and three on the back.

In terms of color options, the Fold2 offers two — black and bronze. A limited edition collaboration with American designer Thom Browne will also be released. Like its predecessor, the latest foldable phone will support a 5G connection.

Although less noticeable, other significant upgrades to the Galaxy Z Fold2 regards the main display’s cover material and the hinge — both of which created issues and delayed the Galaxy Fold’s official release by months last year.


Instead of the colorless polyimide film on the Galaxy Fold — which some tech reviewers had taken off last year thinking it was just for protection — the main display of the Galaxy Z Fold2 is covered with ultra-thin glass (UTG), a folding glass material which Samsung claims to be “thinner than human hair.” The same material was used on the Galaxy Z Flip.

A major improvement to the hinge is its ability to be opened at different angles. The Galaxy Fold only had two options — folded or flat, but the Galaxy Z Fold2’s hinge allows for multiple different positions. The hinge also has what Samsung call a "sweeper" built in, which brushes small particles away as the hinge moves.

The Galaxy Z Fold2 comes with high-dynamic dual speakers, which the company says offer the most powerful sound experience yet among Galaxy phones.

In a late August report, SK Securities forecast foldable phone shipments to reach 3.5 million units this year, growing to 15 million in 2021 and 40 million in 2022. Last year, Samsung sold 40,000 units of the Galaxy Fold.

The price tag remains the same at 1.65 million won and will be released in three colors: bronze, gray and white. The model will also start official sales on Sept. 18 with preorders open between Sept. 11 and 15.

For Korean customers, both models will be put on display for a hands-on experience at Samsung Electronics’ retail store, Samsung Digital Plaza and five Galaxy Studios from Friday.